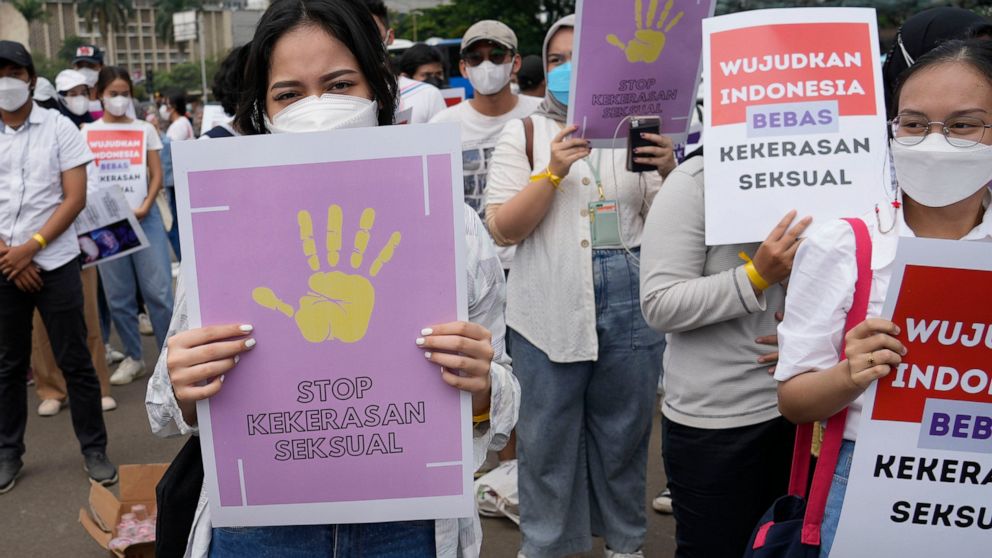 JAKARTA, Indonesia — Indonesia’s parliament Tuesday approved a far-reaching law setting punishments for sexual violence after being spurred into action by a recent case in which an Islamic boarding school principal raped and impregnated several students.

The legislation had languished for years amid arguments it has a liberal feminist ideology that contravenes religious and cultural values in the world’s biggest Muslim-majority nation.

The law recognizes men and children can be victims of sexual violence. Indonesia’s Criminal Code, a legacy of the Dutch colonial era. recognizes only rape and lewd crimes committed by men against women and doesn’t have provisions for restitution or other remedies for victims and survivors.

In addition to acknowledging sexual violence as punishable criminal acts, the law has provisions for protection and recovery for the victims.

Of the House’s nine political parties, only the conservative Muslim-based Prosperous Justice Party, known as PKS, rejected it as they wanted the bill to prohibit extramarital sex and homosexual relations.

“Our rejection is part of our struggle to fight for the prohibition and punishment of perpetrators of adultery and sexual deviations which are ultimately not include in the bill,” said Al Muzzamil Yusuf, a legislator from PKS.

The law was passed a week after an Indonesian high court sentenced an Islamic boarding school principal to death for raping at least 13 students over five years and impregnating some of them. Several girls were 11 and 14 years old and were raped over several years, drawing a public outcry over how he wasn’t caught earlier.

President Joko Widodo in January appealed to the House of Representatives to speed up deliberation on the sexual violence bill as it has languished in the legislature since 2016 as critics lambasting lawmakers as having “no sense of crisis.”

“The protection of sexual violence victims should be our common concern which should be urgently addressed,” Widodo said.

The law also mandates that a trust fund and recovery services to help victims recover be established and regulated by the government.

The bill was initiated by the National Commission on Violence Against Women in 2012, and calls for it to be fast-tracked followed the shocking gang rape and murder of a 13-year-old schoolgirl by 14 drunken men in Bengkulu in 2016. It soon stalled due to the resistance from PKS and Islamic groups.

The latest draft won majority support when provisions on rape and coerced abortions were removed from the bill to avoid overlapping with proposals to amend the Criminal Code.