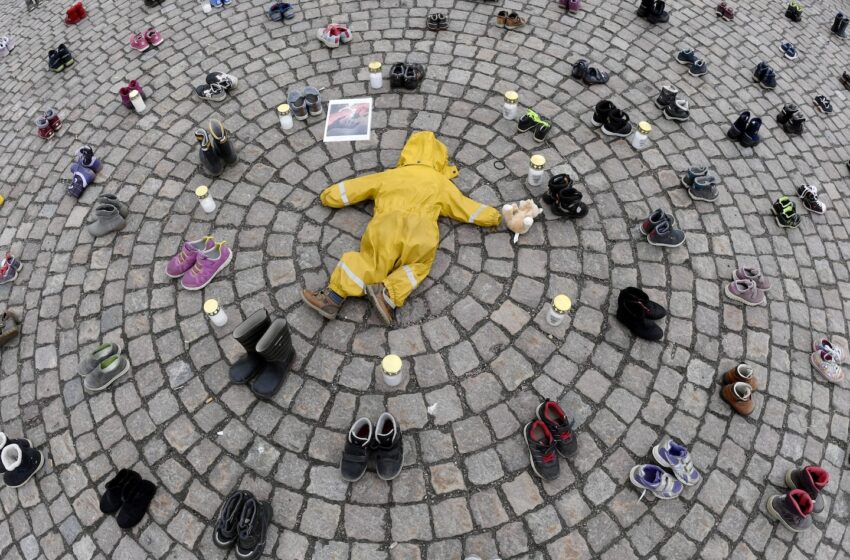 Rows of small shoes were placed alongside candles in Helsinki, Finland, during a protest Sunday to draw attention to the children killed during Russia’s invasion of Ukraine, specifically in the battered port city of Mariupol.

In total, there were 210 pairs. They symbolized the total number of young lives Ukrainian officials said were lost in south-eastern city of Mariupol, including when the drama theater — where hundreds of civilians were sheltering — was hit on March 16.

The humanitarian crisis is growing in Mariupol, where at least 5,000 residents have died in the month since Russian forces laid siege to it, its mayor Vadym Boychenko said last week on Telegram, citing preliminary estimates. Boychenko, who also cited a hospital that had been bombed, condemned the “deliberate destruction of the civilian population of Mariupol” and estimated that 90 percent of the city’s infrastructure had been wiped out. The Washington Post was unable to confirm those tallies.

Witnesses told The Washington Post at the time that a white flag had been tied to the top of the drama theater to let Russian troops know children were inside. The word “children” was also written in large white letters in Russian in front of and behind the theater, satellite images revealed. The building, when struck, was reduced to rubble.

At Sunday’s protest — organized by the Ukrainian Association in Finland, a group which was founded in 1997 to represent Ukrainians residing in the country to draw attention to what it called “Russian war crimes” — the shoes were laid outside The Finnish National Theatre.

Organizers said they had written the world “children” on either side of the national theater — as those at the Mariupol Drama theater had done.

A child-size yellow jacket was also photographed at the scene of the protest, sprawled face down on the floor, a soft toy right next to it.

“The aim of the event is to draw public attention to inhumane crimes committed by Russian army against the Ukrainian people,” the organization wrote on Facebook as they called on people to join the event.

Of the 100,000 estimated civilians remaining in the city most are without food, water, or adequate heating. Access to the internet is also scarce.

Its strategic position on the Azov Sea, between pro-Russian areas of Donbas and the Russian-annexed Crimea peninsula, has made it a key target for Moscow’s military offensive.

Inside the terror at Mariupol’s bombed theater: ‘I heard screams constantly’

The Red Cross warned recently that a path out of the besieged city appeared to have land mines and that those attempting to flee faced a “long, difficult journey.”

Pascal Hundt, of the International Committee of the Red Cross, told Sky News Sunday that “it was really hell,” in the city.

The Mariupol mayor Boichenko said last week that hospitals had come under attack amid the bombardment, and that 50 people had burned to death inside one of the city’s healthcare facilities.

Julian Duplain in London contributed to this report.