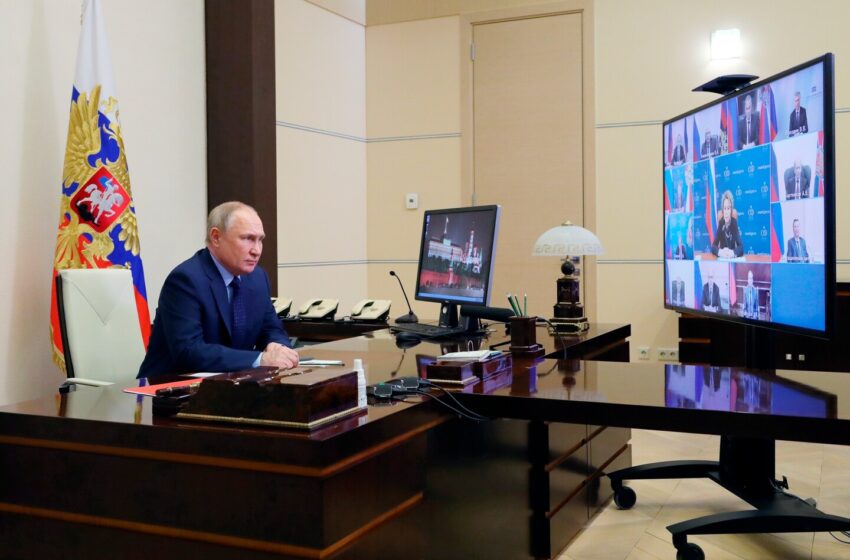 More than six weeks into his war against Ukraine, Russian President Vladimir Putin is feeling the sting of failure.

Thousands of Russian battlefield deaths. Three front-line retreats by the Russian military. Millions of Ukrainians who will never forgive Moscow. More isolation than ever — and perilously few goals achieved.

Putin is now regrouping to focus his military campaign on Ukraine’s east in what is widely seen as “Plan B,” after his forces failed to topple Ukraine’s government or wrest control of its biggest cities. All the while, questions are mounting about how a Russian leader steeped in security policy and known for railing against the folly of regime-change wars could have sleepwalked into a such a strategic morass.

At issue is a broader quandary that will occupy historians for years: How could Russia — a country with such deep familial, cultural and historic ties to its western neighbor — get Ukraine so wrong?

Russia’s oligarchs and their long record of masking fortunes

Officials in the United States and Europe are piecing together the answer to that question. What emerges, those officials say, is a picture of a hubristic and isolated leader, beset by biases and skewed information, pressing forward with a calamitous decision without consulting his full cohort of advisers. Putin rushed headlong into Ukraine, confident in his ability to secure a quick victory and weather any blowback within the authoritarian system he erected at home, they said. Underpinning his assumptions: misconceptions about Ukraine fundamentally rooted in Moscow’s colonial past.

“Historically, there just hasn’t been expertise on Ukraine in Russia at all,” said Alina Polyakova, president and CEO of the Washington-based Center for European Policy Analysis. “When you don’t believe a country’s a real country and a people’s a real people, why would you invest any expertise in a thing you don’t think exists?”

In the run-up to the war, some leaders in Europe and Ukraine discounted the possibility that Putin would invade, because they didn’t see sufficient Russian forces amassed along the border for Moscow to succeed with a multi-front offensive and subsequent occupation.

What they didn’t realize was that Moscow was nurturing deeply flawed assumptions, particularly about the fortitude of Ukrainian President Volodymyr Zelensky and the willingness of Ukrainians to resist, and was indeed planning a large-scale invasion — just an ill-conceived one. The operation, analysts said, bore the personal fingerprints of Putin.

“It’s clear this was a military operation designed by spooks, not generals,” said Mark Galeotti, a Russia analyst at Mayak Intelligence. “It makes no sense in purely military terms.”

According to U.S. and European officials, Putin had been keeping the plans very close-hold, with top military commanders and trusted advisers unaware that Russia was going to mount an offensive.

The Russian leader notoriously doesn’t use a smartphone and rarely accesses the Internet. He spent years snuffing out Russian independent news and erecting an authoritarian system of government devoid of constructive feedback or dissent. By early this year, according to U.S. and European officials, he was operating in an echo chamber, surrounded by advisers who, according to Galeotti, “had learned you do not bring bad news to the czar’s table.” Putin’s isolation, the officials said, had been compounded by covid-19 and his limited contact with others.

“It’s demonstrably obvious now that there was a combination of people not telling him what he needed to hear and him not listening when they did tell him stuff that he didn’t want to hear,” said James Cleverly, Britain’s minister of State for Europe and North America.

Putin has long viewed independent Ukraine as a quirk of the Soviet empire’s collapse that needed to be handled personally. According to Russian journalist Mikhail Zygar’s book, “All the Kremlin’s Men,” Putin for years controlled policy toward Ukraine himself because he didn’t trust anyone else.

“We need to deal with Ukraine or we’ll lose it,” Putin would say at meetings dating back to the early 2000s, according to Zygar, who labeled Putin’s coterie of close advisers the “Collective Putin,” because they tend tailor their activities to anticipate his desires.

Putin’s confidence in his personal expertise on Ukraine came through in a lengthy treatise he published last summer. The article portrayed Ukrainians as a people who are naturally the same as Russians but have been taken hostage by Western governments bent on radicalizing them against Moscow.

“That leads to this belief by Putin and others that if you can just decapitate the Zelensky government, knock out the political leadership, then there will be an outpouring of pro-Russian sentiment by the rest of Ukrainian society,” said Andrea Kendall-Taylor, a senior fellow at the Center for a New American Security.

The Russia got Ukraine wrong is “because this was totally a Putin-directed operation,” said a U.S. official who specializes in Russia and like others spoke on the condition of anonymity to discuss sensitive information.

Putin, the official said, “is as convinced as anyone can be of his truths.”

‘An enormous amount of arrogance’

The assumption of a quick Ukrainian government collapse undergirded the invasion, according to Ukrainian, U.S. and European officials. In the early days of the war, Russian state news already began promoting the notion that Zelensky had fled, even as he posted videos from Kyiv.

Putin had witnessed a rapid collapse of the Ukrainian government when former president Viktor Yanukovych decamped to Russia in 2014. According to Zygar, Putin shouted at Yanukovych not to leave Kyiv and described him as a “cowardly piece of s—” when he fled the capital in response to a pro-Western uprising. Those events may have led Putin to imagine a similar scenario with Zelensky.

Putin’s misconception about Ukrainian weakness was paired with a swaggering view of Russian power. He famously boasted to a top European official in late 2014 that he could easily seize Kyiv “in two weeks” if he desired — a misconception he appeared to continue believing until he attempted to do so.

“He has an unwavering belief in his ability to control events,” a senior NATO intelligence official said.

Perhaps no moment underscored the level of misconception more than the attempt by elite Russian paratroopers at the outset of the invasion to land at the Hostomel cargo airport northwest of Kyiv — apparently with the intention of sweeping breezily into the Ukrainian capital.

“Just looking at how this played out, it feels there was an enormous amount of arrogance,” a European official said. “You look at the insertion of the airborne forces at Hostomel airport, which was clearly designed to do a decapitation (mission) in Kyiv — and they got smashed.”

Alexander Gabuev, a senior fellow at the Carnegie Moscow Center, said the Russian leadership doesn’t see Ukraine, a place once controlled by Moscow, as deserving of rigorous study.

“There was this false sense of familiarity,” Gabuev said. “That’s what Russia completely misunderstood.”

Once the assumptions proved false, Russia’s military proved unable to regroup, saddled by fuel, ammunition, transport, food and other logistics problems, as well as demoralized soldiers who hadn’t been told they were about to fight a war.

“If the initial plan is bad and none of the other preparation is there, there’s no durability,” Rand Corp. senior defense analyst Scott Boston said.

U.S. and European officials said that Russia’s poor performance in the initial stages of the war has led to bad blood between the Russian military and intelligence establishments and a serious search for scapegoats.

What exactly Russian intelligence was reporting to Putin regarding Ukraine before the war is unclear, but multiple U.S. and European officials said Putin’s immediate advisers had shown an unwillingness to give the Russian president information that challenged his assumptions. Lower down individuals in Russia’s security establishment thought the invasion was ill-conceived but their concerns didn’t reach the top, the officials said.

In U.S. and European intelligence circles, the FSB’s reputation stands in contrast to the ruthless, cunning reputation of its predecessor, the KGB. Several current and former officials described the Russian security service as rife with corruption, beset by bureaucratic bloat and ultimately out of touch.

A Ukrainian intelligence official said that the FSB had spent millions recruiting a network of pro-Russian collaborators that ultimately told Putin and his top advisers, among them the current FSB director, what they wanted to hear: The central government in Kyiv wouldn’t hold and resistance would collapse.

The official singled out pro-Russian politician Viktor Medvedchuk, who made Putin the godfather of his daughter, as a significant source of misleading information. Medvedchuk, a Ukrainian politician who has long promoted Russian interests, was charged with treason last year but allegedly escaped house arrest in the days after the invasion.

European officials said that the Kremlin was also getting information from out of touch former elites associated with Yanukovych, who, like Medvedchuk, stood to gain from a Russian power grab. In the weeks before the invasion, the British government warned that Russian intelligence was plotting with Yanukovych’s former prime minister, chief of staff and deputy prime minister.

Regardless of the information stream, Putin believes himself to be the biggest expert on Ukraine, Soldatov said, noting the tendency of Russian officials to assume they understand Ukraine.

“This level of chauvinism — you can see it everywhere,” Soldatov said. “It’s a direct legacy of this unfortunate imperial past.”

Dan Lamothe contributed to this report.