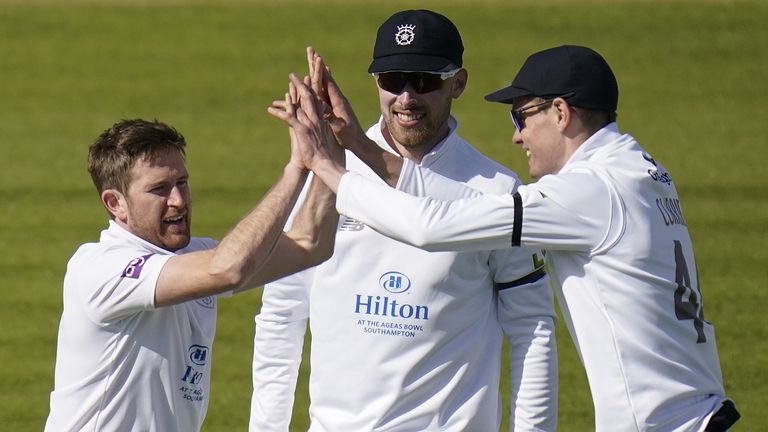 Hampshire raced to victory in their LV= Insurance County Championship Division One opener as they thrashed Somerset by an innings and 113 runs inside three days.

Somerset trailed by 223 after resuming on 25 without loss and were skittled for 135 in their second innings at the Ageas Bowl as the home side claimed 23 points.

Hampshire, whose first-innings total of 428 had given them a commanding lead, ripped through Somerset’s batting line-up thanks to Mohammad Abbas (four for 22) and James Fuller (three for 23).

Ben Compton notched his maiden first-class century in England as Kent closed in on Essex‘s mammoth first-innings total in the clash.

Compton, the South African-born grandson of former England great Denis Compton, scored a patient 129 in Chelmsford as Kent ended day three on 405 for five – 109 runs behind the hosts’ 514.

Jordan Cox weighed in with the fifth century of the match as he reached the close unbeaten on 100 and, once Kent had overhauled the follow-on target with only four wickets down, the draw became inevitable with a day to play.

Matt Lamb’s second first-class century underpinned Warwickshire‘s fightback against Surrey as the opening-round clash between the two title contenders heads for a draw at Edgbaston.

Reigning champions Warwickshire closed on 293 for seven in reply to Surrey’s 428 for eight.

At 41 for four early on the third morning, Warwickshire were in deep trouble but Lamb (106) and Sam Hain (78) added 157 to stall the visitors’ charge.

Ryan Higgins hit an unbeaten 134 to revive Gloucestershire‘s hopes of securing an opening-round win against Northamptonshire.

Higgins arrived at the crease with his side languishing on 21 for four and still 44 in arrears, but he teamed up with Chris Dent (54) and then Tom Lace (73) as his side reached the close with an unlikely lead of 261 and four wickets in hand.

A captain’s innings by Steven Mullaney helped Nottinghamshire turn their match against Sussex on its head on the third day at Hove.

Mullaney, who had come to the wicket with Nottinghamshire on 52 for four in reply to Sussex’s 375, scored a career-best 192 – including a stand of 144 with Joey Evison, whose unbeaten 109 was his maiden first-class hundred.

At Lord’s, Tom Helm’s two wickets in successive balls sparked a Derbyshire collapse to bolster Middlesex‘s hopes of a win on day three.

The visitors were 304 for six in mid-afternoon chasing Middlesex’s first-innings tally of 401 and Helm trapped Anuj Dal lbw for 52 before Sam Conners was sent on his way for a golden duck next ball.

When fellow seamer Toby Roland-Jones then took two wickets in three balls in the next over, including Alex Thomson for 45, Middlesex had taken four for none in nine deliveries, leaving Derbyshire on 304 all out.

Middlesex closed on 201 for three in their second innings as Max Holden struck a rapid 68 not out, sharing an unbroken fourth-wicket stand of 141 with Robbie White (79 not out) to leave the hosts 298 runs ahead with a day to go.

Opener Ed Pollock smashed a maiden first-class century to put Worcestershire in complete control of their match against Leicestershire at Grace Road.

Pollock raced to three figures from 113 deliveries as the visitors reached the close on 234 for five, a lead of 369.

Alex Lees scored an unbeaten 163 and was well supported by David Bedingham (74 not out) and Scott Borthwick (64) as Durham established a first-innings lead of 114 on the third day of their match against Glamorgan in Cardiff.