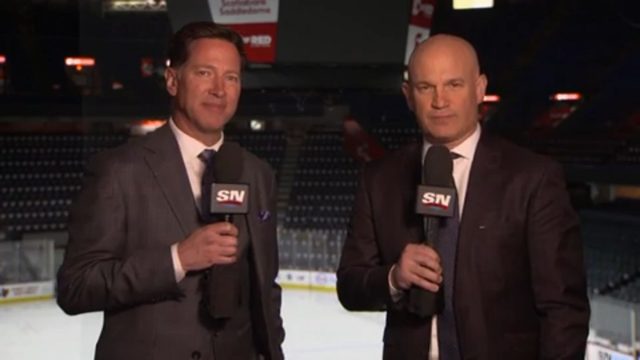 CALGARY – Jane and Guy Gaudreau were bouncing up and down as they hugged in celebration of their son’s milestone moment.

A good chunk of the 16,000 around them reacted much the same way, as Johnny Gaudreau was mobbed on the ice by teammates.

It was the moment everyone in attendance was waiting for, as Gaudreau became the ninth player in Flames lore to hit 100 points in a season.

What wasn’t clear at the time was that his assist on Matthew Tkachuk’s goal would kickstart a rare, third-period comeback that would set the stage for what will be remembered as a historic night.

A third Tkachuk goal capped a four-goal comeback in the third period of a 5-3 win over Seattle that saw Gaudreau add another assist.

That’s the type of impact Gaudreau has had this season, leading his team to the most improbable of division crowns by chipping in with offence and a spark when needed most.

That’s what Hart candidates do.

It’s not what undersized, fourth round picks generally cobble together.

His well-documented journey from Hobey Baker winner to perennial NHL all-star now has him sitting amongst NHL elite with a triple-digit season that still has nine games left in it.

Think of the greats who’ve played for this franchise and consider the fact Joe Nieuwendyk never hit 100.

Nor did Jarome Iginla.

How special to share this moment with his parents in town, in the city that adores him.

“I’m sure my mom and dad are pretty excited,” smiled Gaudreau, who insisted earlier in the week that finishing with 99 points three seasons ago was no big deal.

“They hadn’t been out here in probably three years, so my dad will probably tell me I didn’t play the best game, but he’s going to be happy for me. It’s exciting to have him here.”

As for the milestone, he smiled, “It’s cool.”

He was more jacked about how exciting the game ended, giving the Flames just their second win of the season when trailing after two periods.

“If we lost 5-4 tonight and you asked that question I’d just say, ‘big deal,’” said Darryl Sutter, who had to switch up his lines and pull Jacob Markstrom in favour of Dan Vladar in the third to aid the team’s rebound.

For the record, he suggested earlier in the presser he was happy Gaudreau, “got it off his back” and hoped he “has 20 more in him.”

As things are about to get much more intense around the Dome over the next few weeks, these are the moments to celebrate.

“Us, as linemates and teammates, would be lying if we said we weren’t trying to get it for him and thinking about it most of the last couple games sitting at 99,” said Tkachuk, who immediately turned to Gaudreau and gave him a big hug as teammates joined in.

“It speaks to the year he’s having. And we’re not done yet.”

Not by a longshot, as the focus now will be on Gaudreau and his linemates continuing their season-long dominance in the post-season.

But first, you can bet Gaudreau and Elias Lindholm will do what they can to push Tkachuk and his 92 points into triple digits.

Thanking his father earlier in the day for coaching him on and off the ice, Gaudreau agreed there are similarities between the way dad pushed him and the way Sutter has managed to squeeze the most out of his gifted, 5-foot-9, 165-pound frame.

“Growing up, if I played bad he was hard on me,” said Gaudreau, whose father also grew up on a farm, working the land.

“I think that’s why I play well under coaches who demand a lot from their players because I kind of grew up that way. Always expecting me to be the best on the ice and work the hardest. I think that’s what made me the player I am today.”

A Century Man, something he insists he never dreamed of as a youngster.

“As a kid I just wanted to play in the NHL someday – I never dreamed of that,” said the Boston College star, taken 104th overall in a 2011 draft class in which he sits second in points.

“As I got older, a little bit closer to the end of my college career, I thought maybe it was a possibility (of playing in the league).”

Yes, this is a moment in time worth cherishing.