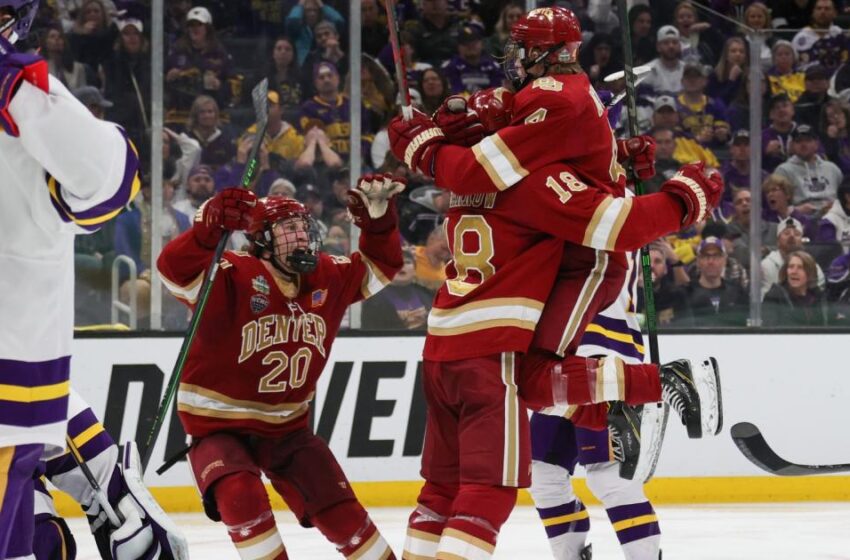 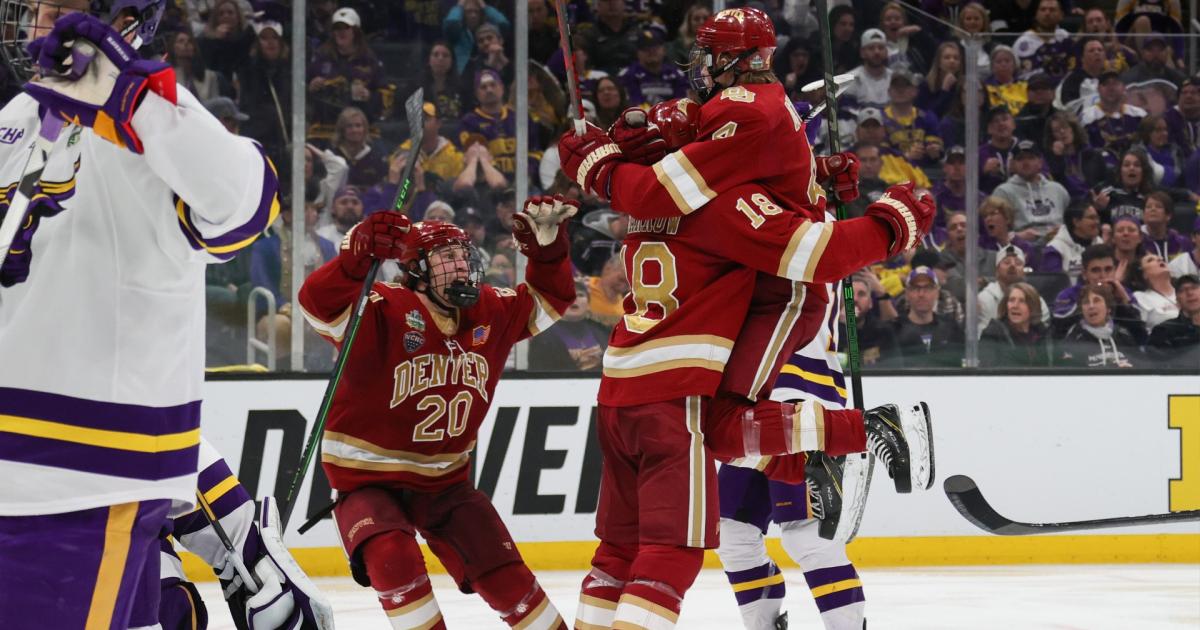 For the ninth time in program history, Denver is the NCAA Division I hockey national champion.

Denver scored five unanswered goals in the third period to take down Minnesota State 5-1 on Saturday. Five different Pioneers found the back of the net as the team won the national title for the first time since 2017.

NATIONAL CHAMPIONS 🏆@DU_Hockey scores all 5️⃣ of their goals in the third period to bring home the program’s 9️⃣th National Championship title!!!#MFrozenFour pic.twitter.com/XQ1rQqEqCc

Sam Horton got the Mavericks on the board with a power-play goal in the first period. After Minnesota State shut down Denver in the second period, the Pioneers found their groove in the third.

It started with a goal by Ryan Barrow less than five minutes into the final frame. He put in a rebound through the legs of Hobey Baker Award winner Dryden McKay to tie the game. Less than three minutes later, Mike Benning ripped a slap shot past McKay as a Denver power play expired to put the Pioneers in front.

Massimo Rizzo finished off a 2-on-1 with Carter Mazur to build a 3-1 lead. Empty-net goals by Brett Stapley and Cameron Wright sealed the deal.

Magnus Chrona made 27 saves in the Denver win while McKay stopped 15 of the 18 shots he faced.

Denver is now tied with Michigan for most championships in NCAA Division I history with nine. The win in Boston’s TD Garden marks the third time the program has won the national title in that city.

Minnesota State fell short of winning the program’s first NCAA Division I title. This was the first time the team had been in the Frozen Four championship.

Denver is running away with this game🏃‍♂️💨 3 goals in the 3rd with this last one by Massimo Rizzo!!

10:13 p.m. ET — Denver’s Cole Guttman appears to make it 3-1 just moments after the Benning goal, but the goal is waived off for goaltender interference. Bobby Brink goes into the crease and makes contact with McKay before the puck goes in. Going to review.

And wouldn’t you believe it…THAT’S 2 FOR THE PIONEERS!!

10:05 p.m. ET — Now Denver heads to their third power play of the night. Sam Morton off for tripping. Denver 0-for-2 so far in the game and have not scored a power play in the NCAA tournament.

10:03 p.m. ET — GOAL! Denver’s Ryan Barrow collects a rebound in front and beats McKay to tie the game. Slap shot from the wall by Mike Benning is saved by McKay but Barrow slides the rebound through his legs. 1-1 with 15:14 to go.

10:02 p.m. ET — Another great chance for the Mavericks off an offensive zone faceoff. Puck thrown in front, scrum ensues but the puck stays out.

9:59 p.m. ET — Huge stop by Chrona in the opening three minutes of the third. 2 on 1 for Minnesota State, Jake Livingstone walks on the right side but shot is saved by the Denver goalie.

9:55 p.m. ET — Puck is down for the 3rd period. Minnesota State 20 minutes away from the program’s first national championship.

No goals on either side in the second period, score remains 1-0 Minnesota State. Big stops by Chrona early to keep it a one-goal game. Denver finally got some momentum late, but yet to find the back of the net.

Shots 18-8 in favor of the Mavericks.

9:35 p.m. ET — Huge pad save by McKay on Carter Mazur late in the 2nd. Turnover by Minnesota State down low and Mazur left alone with the puck in the slot, but no dice.

9:31 p.m. ET — Lucas Sowder rings the crossbar for Minnesota State from a shot off the rush. Beat Chrona over the blocker, but couldn’t beat the iron. 4:27 to go in the second.

9:25 p.m. ET — Well executed 3 on 2 by Denver, but Cameron Wright hits the outside of the net. Had McKay beat on the glove side. Best chance of the night for the Pioneers.

9:21 p.m. ET — Second TV timeout of the middle frame with 8:51 to go. Game is more than halfway over and Denver has just five shots on goal. Score remains 1-0 Minnesota State.

9:17 p.m. ET — Minnesota State’s David Silye knocks down a D-to-D pass out of the air and gets a shorthanded breakaway, but stopped by Chrona. Second breakaway allowed by Denver on the power play, Chrona has bailed them out both times.

9:15 p.m. ET — Bad penalty by Minnesota State as the team is called for too many men. Denver to its second power play of the night.

First period ends with the Horton goal being the only tally. Shots 8-3 in favor of Minnesota State. Back-and-forth play for the first half of the period, but the Mavericks took over in the last 10 minutes, with help from the Denver penalty.

Mavericks are 19-1-0 this year when leading after the first period.

8:44 p.m. ET — Smith penalty is done. Couple of good chances for Denver late on the power play, but nothing by McKay. A Massimo Rizzo shot was blockered away and a Brett Stapley one-timer missed high.

8:42 p.m. ET — Minnesota State’s Josh Groll gets a shorthanded breakaway, but runs out of room trying to get by Chrona on the side. Still 1-0 Mavericks.

8:39 p.m. ET — Now it’s Minnesota State with a penalty as Nathan Smith is called for roughing. Denver to the PP, went 0-for-3 against Michigan in the semifinals.

8:37 p.m. ET — GOAL! Minnesota State strikes on the power play thanks to a goal by Sam Morton, his ninth of the year. Shot from the point was blocked in front before finding its why to Lucas Sowder who passed to Morton for the one-timer. Secondary assist to Brendan Furry, goal scored 6:01 of the first.

8:23 p.m. ET — Denver’s Massimo Rizzo left alone in front but the pass from behind the net by Cameron Wright was deflected away by McKay. Still 0-0 as we reach the halfway point of the period.

8:05 p.m. ET — The starters for the game are announced with McKay and Chrona in net for their respective teams.

The senior beat out Denver’s Bobby Brink and Minnesota’s Ben Meyers for the honor. McKay set an NCAA record for wins in a season (he’s up to 38) and could add to it with a win tonight. In October, McKay set the NCAA record for career shutouts, surpassing Ryan Miller’s 26. He’s now at 34.

He’ll be in net Saturday night for the Mavericks. Magnus Chrona will be in the Pioneers’ crease.

A number of programs have earned their first NCAA title over the past decade.

UMass, Union, Yale and Providence have won their first championship in the last 10 years. Go back another year, and Minnesota-Duluth earned its first national title in 2011. The Bulldogs later went back-to-back in 2018 and 2019.

On the flip side, Denver and North Dakota recently added their eighth title to their program histories. North Dakota came out on top in 2016, followed by Denver winning in 2017.

Here are all the Frozen Four tournament winners over the past 10 years:

Who has won the most NCAA Frozen Fours?

Michigan and Denver have the most NCAA Division I men’s college hockey championships, with nine. The Wolverines’ last title came in 1998.

North Dakota has eight, Wisconsin has six and Boston College, Boston University and Minnesota have five each.

Here is a look at all the past winners and how many times programs have won.

The NCAA has already determined the locations of the Frozen Four through 2026. One of the most notable locales is Las Vegas in 2026. It will be the first Frozen Four in Vegas.

This also marks the first time the NCAA will hold a tournament in a state that allows legalized gambling since the association changed its stance in May 2018.