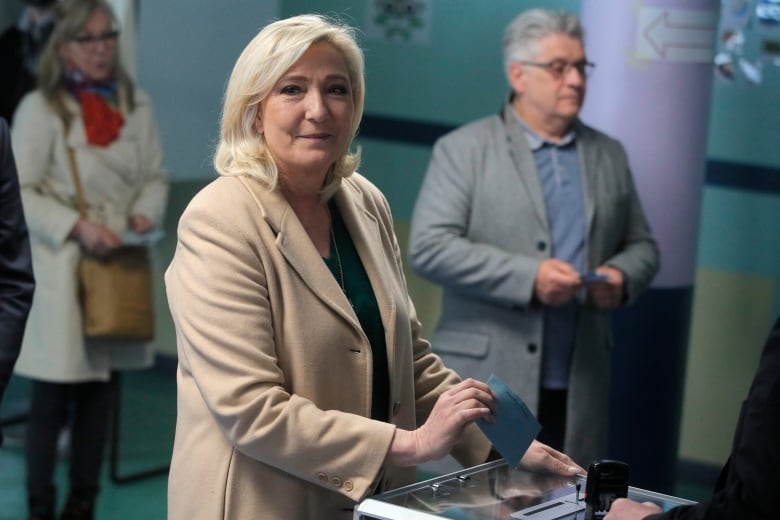 French voters cast ballots in first round of presidential election

Voters in France streamed to polling stations on Sunday for the first round of a tense contest for the presidency, with incumbent Emmanuel Macron’s hopes of re-election clouded by a strong challenge from the far right’s Marine Le Pen.

Macron, a centrist, is asking France’s 48 million voters for a second five-year term. But he’s up against 11 other candidates and widespread voter anger and apathy.

Le Pen, in particular, has tapped into the foremost issue on many voters’ minds: living costs that have soared amid the disruptions of war in Ukraine and the economic repercussions of Western sanctions on Russia.

With its potential to reshape France’s post-war identity, especially if Le Pen wins, the election has wide international significance.

A Macron victory would be seen as a defeat for European populists. It might also not be cheered in the Kremlin: Macron has strongly backed sanctions on Russia, while Le Pen has worried publicly about their impact on French living standards.

Outcome could determine ‘next 50 years’

After voting, Le Pen said that “given the situation in the country and in the world,” Sunday’s election outcome could determine “not only the next five years, but probably the next 50 years” in France.

In the 27-member European Union, only France has a nuclear arsenal and a United Nations Security Council veto. As Russian President Vladimir Putin keeps up his military’s assault on Ukraine, French power is helping to shape the European response. Macron is the only leading presidential candidate who fully supports the NATO military alliance.

The top two vote-getters in Sunday’s election advance to a decisive runoff on April 24 — unless one candidate gets more than half of the nationwide vote on Sunday, which has never happened before in France.

Macron and his wife, Brigitte, voted together in the seaside resort of Le Touquet, making their choices in voting booths with curtains of blue, white and red — the colours of the French flag.

Polls closed at 7 p.m. (1 p.m. ET) in most places but remain open an extra hour in some larger cities.

Among the big unknowns was whether hard-left firebrand Jean-Luc Mélenchon — one of half a dozen candidates on the left — would upset the expected scenario of a run-off between Macron and Le Pen. Polls suggested Mélenchon might fall short, coming in third place.

Macron for months looked like a shoo-in to become France’s first president in 20 years to win a second term. But Le Pen ate into his polling lead in the campaign’s closing stages, as the pain of rising gas, food and energy prices became a dominant election theme for many low-income households.

In 2017, Macron trounced Le Pen by a landslide to become France’s youngest modern president. The win for the former banker — now 44 — was seen as a victory against populist, nationalist politics, coming in the wake of Donald Trump’s election to the White House and Britain’s vote to leave the EU, both in 2016.

If Macron wins, however, it will be seen as a victory for the EU, which has shown rare unity of late in responding to Russia’s invasion of Ukraine. Observers say a Macron reelection would spell real likelihood for increased cooperation and investment in European security and defence — especially with a new pro-EU German government.

Russia’s war in Ukraine has afforded Macron the chance to demonstrate his influence on the international stage and burnish his pro-NATO credentials in election debates.

Other candidates hold differing views on France’s role within the military alliance. Mélenchon is among those who want to abandon the North Atlantic Treaty Organization altogether, saying it produces nothing but squabbles and instability.

Such a development would deal a huge blow to an alliance built to protect its members as the Cold War emerged 73 years ago.