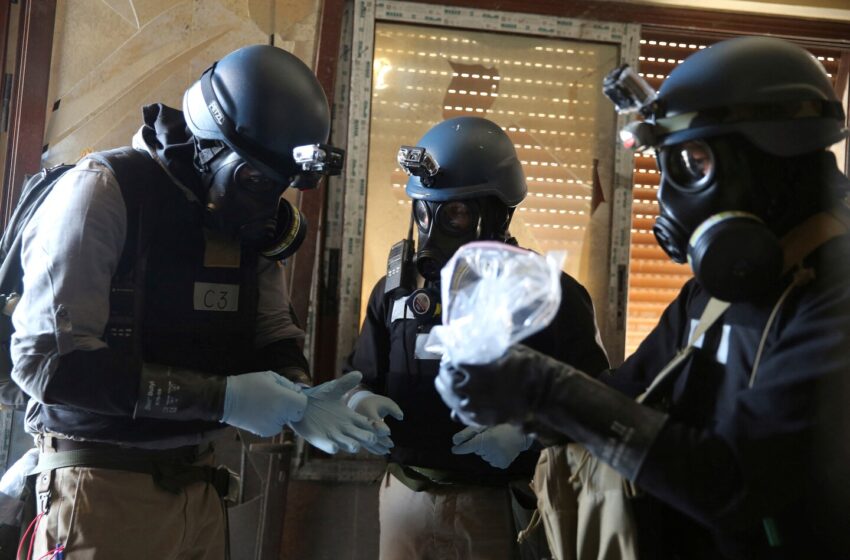 On the morning of April 21, 2014, a lone helicopter discharged a metal canister over the farming town of Talmenes in northern Syria, releasing a foul-smelling gas that made scores of townspeople instantly sick.

A thick fog of yellow vapor drifted through residential streets, killing birds as they flew and bleaching the color out of laundry drying on clotheslines. Within hours, three people — two children and an elderly woman — were dead, and more than 130 others turned up at hospitals with breathing problems, burning eyes and extreme nausea.

Local doctors immediately suspected a chlorine gas attack by the Syrian army. Yet months would pass before residents of Talmenes learned officially what had happened, including the precise nature of the poison that seeped into their shops and houses. With a war underway, getting to the truth about any chemical weapons claims in Syria was a task that often proved too arduous and even dangerous.

Today, investigators are confronting the same challenges in Ukraine following reports of a suspected use of a chemical poison against Ukrainians in the city of Mariupol. While the Pentagon and several international organizations are examining the allegation — first raised earlier this week by the Azov Battalion, a Ukrainian paramilitary group associated with far-right nationalism — the investigation faces numerous challenges, starting with the fact that key evidence is located in a war zone.

Why Russia clings to an outlawed chemical arsenal

U.S. officials and weapons experts say it can be difficult from afar to draw firm conclusions based on symptoms reported by victims and even harder to obtain physical samples that are guaranteed to be free from tampering. A proper investigation takes time, they say, but as the hours and days pass, there often is less hard evidence to collect.

“Ideally you need to have the attack scene secured and the evidence preserved in situ, and that’s clearly not always possible in a war zone,” said Jerry Smith, a British weapons expert who led investigations of alleged chemical attacks in Syria for the Organisation for the Prohibition of Chemical Weapons (OPCW), the Hague-based international watchdog. “The more time it takes to get to the scene, the greater the effect on the quality of the evidence — if you can get to the scene at all.”

Neither the Biden administration nor Ukrainian President Volodymyr Zelensky has officially confirmed the accounts of a chemical attack, which was alleged to have involved an unknown caustic substance dropped from a Russian drone. Pentagon officials on Tuesday acknowledged a “host of difficulties” in assessing the allegations, including the lack of access by outsiders to Mariupol, where the reported victims were said to be recovering.

“These are difficult things to prove even when you are more proximate, and we are not,” a senior U.S. defense official said, speaking on the condition of anonymity under ground rules set by the Pentagon.

The OPCW said on Tuesday that it is closely monitoring the situation in Ukraine. While no firm conclusions have been reached, the “use of chemical weapons anywhere by anyone under any circumstances is reprehensible and wholly contrary to the legal norms established by the international community,” the group said in statement.

Proving a chemical weapons claim can be further complicated depending of the type of weapon used, experts say. Some weapons, such as sarin and other extremely lethal nerve agents, leave distinctive chemical signatures that can be discovered weeks or months later in human bodies or on contaminated surfaces. Other chemicals, such as chlorine and some riot-control gases, often dissipate within hours and are harder to detect.

Any use of chemicals as a weapon of war is outlawed under the international Chemical Weapons Convention, which both Russia and Ukraine have signed, said Jean Pascal Zanders, a Belgian chemical and biological weapons researcher and founder of the blog the Trench.

Zanders urged caution with regard to the Ukrainian claims, noting that the evidence posted on social media from Mariupol is not sufficient to draw conclusions. The incident appears to have been relatively small, and the alleged victims reportedly have recovered.

“We are not exactly seeing a flood of pictures or videos suggesting a mass casualty event,” Zanders wrote on Tuesday. “The reported incident is vague and lacks much contextual detail.”

Syrian activists struggled throughout the war to collect evidence proving Syria’s connection to scores of chlorine attacks between 2014 and 2019. Among those who tried was Houssam Alnahhas, a young medical intern who repeatedly risked his life crossing battles lines to collect shell casings and biological samples after chemical attacks on several towns, including Talmenes, which was struck in the April 2014 incident.

“It was important to hold the perpetrators accountable,” said Alnahhas, who now helps prepare instructional videos to educate Ukrainians on how to respond to a future chemical attack. “It is our duty to document these violations so we can use them whenever there are serious steps toward obtaining justice.”

An OPCW probe could gather enough evidence to prove whether a chemical weapon was used in Ukraine. But the success of such a mission depends not just on access, but also on the willingness of the warring parties to allow the work to proceed.

“You’ve got a whole bunch of stakeholders there,” said Smith, currently the head of the advisory team for the British consultancy CHC Global, “and some of them may not want the truth to come out.”