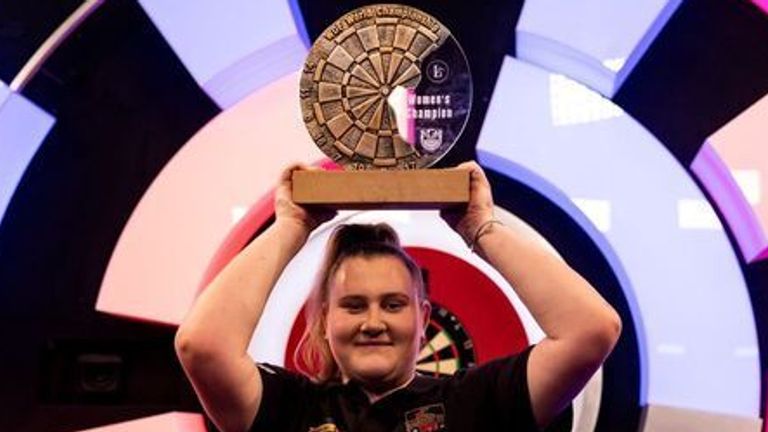 Beau Greaves prophesied her WDF world title win when she was 13 years old; the teenager is now the youngest darts world champion of all time; Wayne Mardle believes the teenage star is now “more marketable than anyone” including ‘Queen of the Palace’ Fallon Sherrock

“She’s already beaten Lisa Ashton and Fallon Sherrock and the way she throws, there has never been a woman on the planet who has a better throwing action than Beau Greaves,” believes Wayne Mardle.

Darts prodigy Greaves not only whitewashed Kirsty Hutchinson 4-0 in Sunday’s WDF World Championship final at the Lakeside, but she rewrote the history books in doing so.

The 18-year-old from Doncaster dropped just one leg, averaging 92.05 and hitting five 180s.

Her throw is as smooth as silk and after landing her 20th match win in a row Mardle was quick to take to social media to praise the teenage star.

He said: “There’s at least an argument for Beau Greaves to be called the best female player in the world right now. Her action is absolutely head and shoulders above any lady player I’ve EVER seen. You could be witnessing the start of darting domination. I’m in awe!!!”

Mardle believes the 18-year-old can overtake Sherrock and Ashton as the most talked about name in women’s darts.

“I’m not sure where Fallon is going to play her darts and I’m not sure Lisa is going to do more Challenge Tour and online darts than the actual circuit, which is the WDF circuit. There is no one who can stop Beau on the WDF circuit,” Mardle told Sky Sports’ Raz Mirza just a day after Greaves’ phenomenal display.

“Do Fallon and Lisa stay away from the WDF? And if they do I can’t see Beau Greaves not winning four or five titles. I think it will be an upset if she actually gets beat.

“I think it’s all about the competition for her. She’s already beaten Lisa and Fallon in BDO ranked finals. It’s not like she can’t beat them and the way she throws there’s never been a woman on the planet that has a better throwing action than Beau Greaves.”

With Mardle having first-hand experience of playing alongside Greaves at exhibition events, ‘Hawaii 501’ has described her throwing action as technically perfect.

“It’s everything that you would teach,” he admitted. “She doesn’t throw like any woman I’ve ever met. She throws with confidence, aggression and belief. Her style is fantastic. I’ve seldom seen it in a woman player.”

Greaves has time on her side and Mardle feels she knows she has the talent to dominate the women’s game for a long time to come.

He said: “Her family are going to have to be close-knit around her because she’s quite a shy girl. She seems to be growing into herself and from a confidence point of view I don’t see any negatives but she has suffered with Dartitis a little bit.

“While there was absolutely no sign of it during the World Championship, a lot was made of it pre-Worlds. I’ve been up close and personal with her and she’s just a wonderful kid and she is a kid that really can dominate.”

Mardle says Sherrock and Greaves are two totally different businesses with the teenager ruling the roost in the WDF while ‘Queen of the Palace’ Sherrock, who opted not to play in the WDF, has worldwide interest.

“Sherrock has still done things and played to a level that we have never, ever seen from another woman before. I’m talking about the game she lost to Peter Wright at the Grand Slam of Darts over 29 legs. She averaged 97, 98. We’ve never seen that from a woman before,” said Mardle.

“With Lisa Ashton and Beau Greaves about, it’s exciting. Let’s be honest, the darts that Beau was throwing (in the WDF final), there is a case to call her the world’s best female player.

“If I had any kind of clout I would be saying ‘get her into the (women’s) World Matchplay’ because she is more marketable than anyone.”