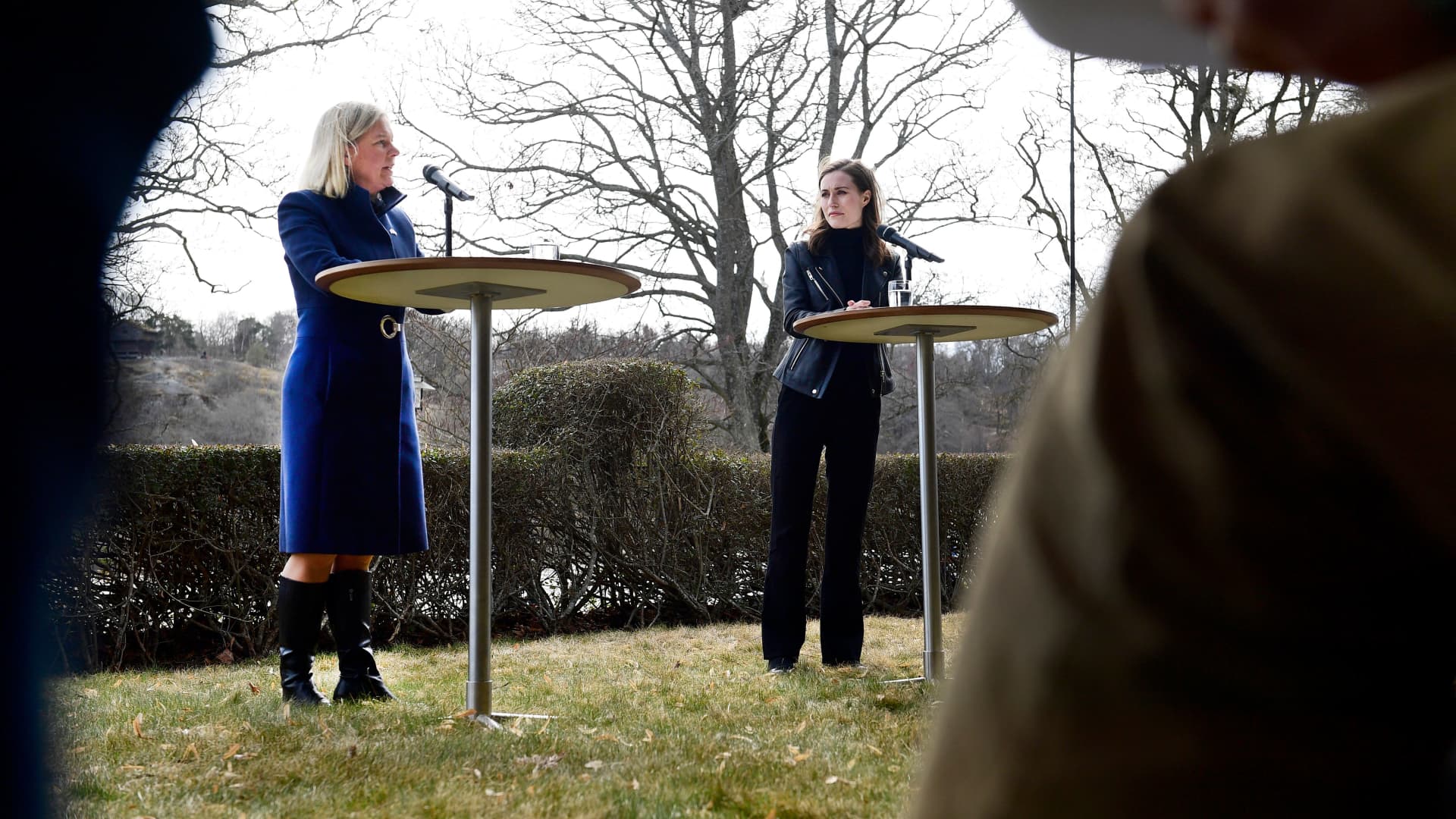 The leaders of Finland and Sweden have both said a decision on whether to apply for NATO membership can be expected sooner rather than later.

LONDON — Finland and Sweden could both seek to join NATO in the coming weeks, warning Europe’s security landscape has “completely changed” in the aftermath of Russia’s onslaught in Ukraine.

Finnish Prime Minister Sanna Marin said Wednesday that the Nordic country, which shares a 1,300-kilometer border with Russia, would decide on whether to join the U.S.-led military alliance “within weeks.”

Finnish lawmakers are expected to debate the pros and cons of joining the 30-member alliance upon returning from their Easter break.

Speaking alongside Sweden’s Magdalena Andersson at a joint press conference in Stockholm, Marin said: “Everything changed when Russia invaded Ukraine.”

“I think people’s mindsets in Finland, also in Sweden, changed and [were] shaped very dramatically because of Russia’s actions,” Marin said. “This is very clear and that caused a need for a process in Finland to have a discussion about our own security choices.”

Sweden’s Prime Minister Andersson echoed this view, saying there was “no point” in delaying analysis of whether it is right for Sweden to request NATO membership.

“I think as I have said so many times this is a very important time in history. There is a before and after the 24th of February. The security landscape has completely changed,” Andersson said.

“We have to analyze the situation to see what is best for Sweden’s security for the Swedish people in this new situation. And you shouldn’t rush into that, you should make it very seriously,” she added.

Marin and Andersson’s comments are the strongest indication yet that the two Nordic countries could swiftly seek to join the military alliance.

NATO Secretary-General Jens Stoltenberg has repeatedly said it is for Finland and Sweden to decide their own path. He has also said “the door remains open” for the alliance to welcome new members.

Russia has long warned against any future enlargement of NATO, reportedly accusing the alliance of being “a tool geared towards confrontation.”

However, Russian President Vladimir Putin’s almost seven-week-old war in Ukraine has resulted in the deployment of more troops on NATO’s eastern flank and led to a sharp rise in public support for Finnish and Swedish membership.

“The difference between being a partner and being a member is very clear and will remain so,” Marin said. “There is no other way to have security guarantees than under NATO’s deterrence and common defense as guaranteed by NATO’s Article 5.”

It is defined by the alliance as a “unique and enduring principle that binds its members together, committing them to protect each other and setting a spirit of solidarity.”

Finland’s Marin said that given Russia is the country’s next-door neighbor, it was critically important for lawmakers to discuss the best way to ensure that the devastating crisis in Ukraine is something that never happens in Finland.

“NATO is an organization where important decisions concerning our security are taken. It is an important part of Europe’s political and security architecture. As part of the discussion, we need to assess how our possible NATO membership would respond to our security needs,” Marin said.

“We also need to be very frank about consequences and risks. There are both short-term and more long-term risks. These risks are there both if we apply and if we do not apply.”