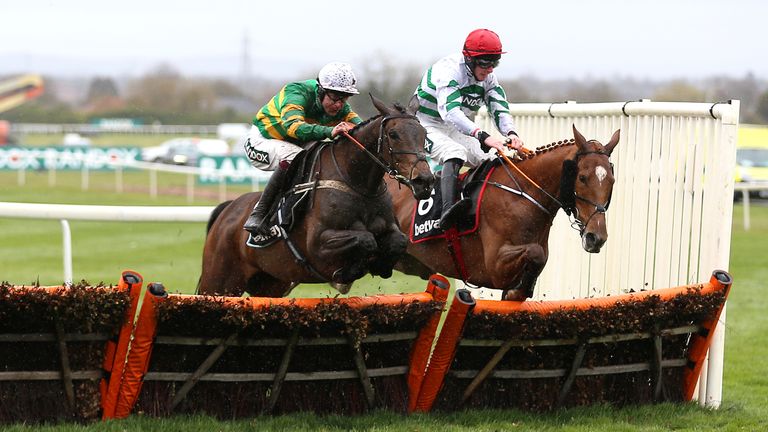 Epatante ran out an easy winner of the Grade One Aintree Hurdle, putting aside any doubts about her stamina for the two-and-a-half-mile trip.

Stepping up in distance for the first time, Nicky Henderson’s former Champion Hurdle winner travelled beautifully throughout and always looked the most likely victor, even as 15/8 favourite Zanahiyr fell at the last.

That left Aidan Coleman clear of the field on the eight-year-old mare, who chased home Honeysuckle at the Cheltenham Festival last month.

With Zanahiyr out of it, Paul Nicholls’ duo Monmiral and McFabulous were left to battle it out for second, with Harry Cobden on Monmiral coming home ahead of Lorcan Williams’ mount.

Henderson said: “She’s right back to her best. That’s the first time she has ever been two-and-a-half-miles and the worry was would she get it? She’s won all sorts of Group Ones over two miles and we asked her to go that bit further and she got it standing on her head!

“She’s quickened very well and her jumping was electric. That’s her secret weapon, well, it’s not a secret weapon. It’s an open weapon.

“She’s just been back to herself, we didn’t have to change an awful lot. This mare, she needs her confidence, and she’s got it back as you can see.”

On plans, the Seven Barrows handler added: “Something like Constitution Hill might come into the equation. We’ll see where they all go, we’ll worry about that later! We’ve put her in at Punchestown. Who knows? She’s on top of her form, isn’t she? She deserves it, she’s done nothing wrong all year.

“She ran a super race at Cheltenham. JP (McManus) said at the beginning of the season ‘Fighting Fifth, Christmas Hurdle, those are our golden aims’. We halved one and won the other and you’d settle for that, then we had a crack at the Champion and she was an honourable second. She’s massively improved on last year.”

Coleman said: “You can just do whatever you want on her really, she had a lovely run through and she was travelling well when we got left alone at the last. It was a super performance and I’m delighted.

There was huge drama in the Anniversary Juvenile Hurdle as Knight Salute and Pied Piper dead-heated in a thrilling finish, before a stewards’ enquiry handed the race to Knight Salute.

The key moment of the race came at the final flight with Davy Russell, on Pied Piper, jumping across Paddy Brennan and Knight Salute, which the stewards would eventually deem enough to revise the placings, handing Knight Salute’s trainer Milton Harris his first Grade One success.

Knight Salute was able to edge in front on the run-in, only for Pied Piper to battle back and seemingly claim a share of the spoils right on the line.

Despite Brennan’s assertion in the enquiry that he did not feel the pair’s coming together made a difference, the officials disagreed.

The Boodles winner Brazil checked out on the run to the last and was beaten 12 lengths back in third.

Last seen when a well-beaten third in the Denman Chase at Newbury, Paul Nicholls’ 10-year-old once more sidestepped Cheltenham this season and bounced right back to form with a dominant display.

Kemboy, the 2019 winner of the race, jumped poorly and could only manage third, while Russell and Conflated tried to sneak into contention and got to within a length of the 13/2 winner but was unable to reel in Cobden’s mount.

With Henderson, and even Willie Mullins and Dan Skelton holding out hope of catching Nicholls in the race to be champion trainer, the £140,000 added to his tally here could make all the difference.

Millers Bank gave both trainer Alex Hales and jockey Kielan Woods the biggest winner of their careers as he took the Festival-opening Manifesto Novices’ Chase.

Pre-race favourite Erne River fell, while a bad blunder from Nicholls’ Pic D’Orhy ended any hopes he had.

Rachael Blackmore dictated the pace on Henry de Bromhead’s Gin On Lime but, having run keenly in the early stages, by the second-last she was running on empty which meant it was between the two Colin Tizzard runners, The Widdow Maker and War Lord, and Millers Bank.

Having briefly been caught flat-footed, Millers Bank (7/1) surged through to the lead and powered away from War Lord to win by 10 lengths.