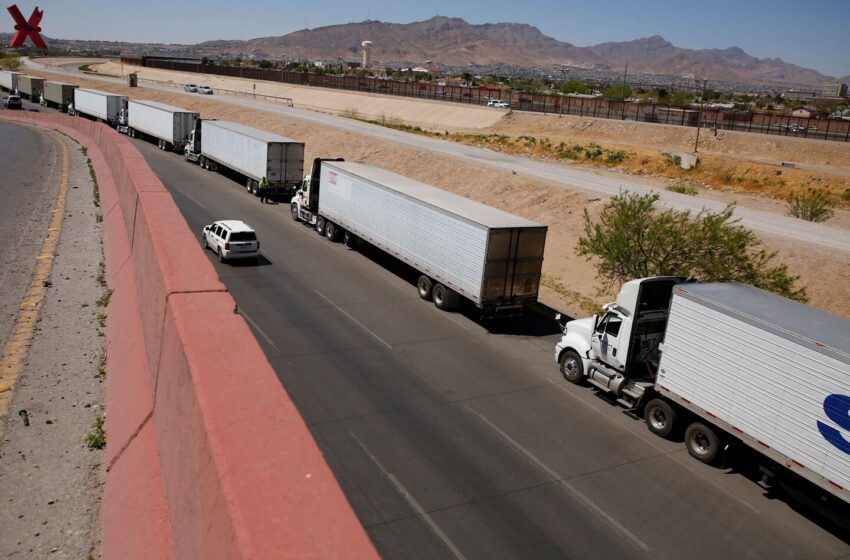 Economic fallout appeared to worsen on Thursday as Texas Gov. Greg Abbott (R) largely kept in place new inspection rules for commercial trucks entering from Mexico, with some companies saying they aren’t able to fulfill orders because trucks are stuck in multi-mile backups at a number of entry points.

Little Bear Produce is a Texas-based grower-packer-shipper, farming 6,000 acres in Texas, supplementing its inventory with Mexican-grown produce so it can be a year-round supplier to major grocery chains like Wegman’s, H-E-B, Publix, Albertons and Kroger.

Bret Erickson, senior vice president of business affairs for Little Bear, says the added inspections have cost them “hundreds of thousands of dollars” already, not to mention the reduced paychecks for many loaders who have had no work as trucks fail to show up.

“This has directly impacted our business since late last week. We would typically be receiving 10 to 12 loads of watermelon per day from Mexico, as well as different kinds of herbs and greens. Since the middle of last week, we have received zero of those shipments of watermelon,” he said. This means they have failed to meet their business obligations with major retailers, who have in turn had to find Mexican melons from further away, such as from Arizona. Added distance means added fuel costs.

“We all know the cost of fuel these days is outrageous. Ultimately it means consumers will bear the brunt of that increased cost,” Erickson said, adding that reduced supply overall also drives up prices.

“As a Texas business we were really confused and disappointed by this decision by Gov. Abbott, in a state that touts itself as business-friendly,” he said. “This was a direct hit to Texas businesses, businesses that are already facing increasing costs in fuel, fertilizer, labor and packaging.”

Instituted in response to the Biden administration’s announcement that a pandemic-era impediment to immigration would be discontinued, Abbott’s state inspections caused thousands of trucks to back up for as much as eight miles at ports of entry. Trucks containing household goods, car parts and other shelf-stable goods have been delayed, tangling up supply chains that involve hundreds of thousands of jobs on both sides of the border. Multiday backups could lead much of the fruit and vegetable produce to spoil, rendering it worthless.

Abbott has said he wants Mexican governors to reach individual agreements with him to increase safety inspection of trucks crossing the border. He held a news conference Wednesday with the governor of Nuevo León, Mexico and said they had hashed out such an agreement, promising to lift the onerous additional inspections in the one area. It is unknown whether Abbott will strike similar deals with other Mexican states, and whether these changes will facilitate the resumption of smooth trucking between the two countries.

The ban on avocados from Mexico could be bruising, the longer it goes on

Many are not sanguine about what comes next.

“Yesterday’s circus with Gov. Abbott was just that: All show,” said Matt Mandel, vice president of finance for Sun Fed, a grower-shipper primarily of Mexican-grown fruits and vegetables. “The protests on the bridges ended and traffic started flowing again, albeit very slowly. It remains to be seen if the continued inspections create another scenario where the truckers refuse to work again.”

A statement from multiple Mexican governmental agencies, including the Business Coordinating Council and the Confederal of Industrial Chambers of Mexico, pegs the losses at $8 million per day.

Losses associated with the remaining port logjams depends on whether Gov. Abbott makes agreements with the other Mexican governors today, said Lance Jungmeyer, president of the Fresh Produce Association of the Americas. The northeastern Mexican state of Tamaulipas is key, he said, because a majority of produce crosses the Rio Grande there via the Pharr-Reynosa International Bridge into Texas.

U.S. imports little from Ukraine and Russia, but food and farming costs are expected to rise

Jungmeyer said that as of the opening of Thursday’s business at Texas ports of entry, things still looked rough and that there were reports of “very slow traffic.”

“I am hearing that the Texas Department of Public Safety continues with intensive inspections outside all ports of entry except the one announced yesterday,” he said. “The Tamaulipas governor is looking to meet with Gov. Abbott today.”

If meetings cannot be arranged today, Jungmeyer said, at a minimum Gov. Abbot should give a “grace period” and cease inspections for other ports until he has the opportunity to meet.