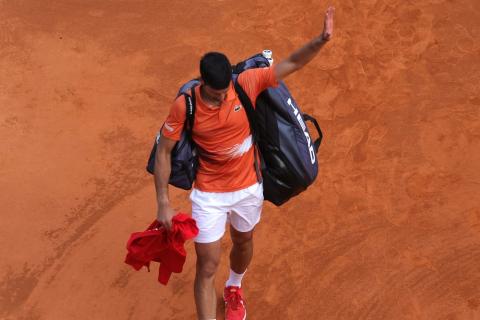 Novak Djokovic opened his clay-court season with a surprising loss to Alejandro Davidovich Fokina at the Monte Carlo Masters on Tuesday.

Davidovich Fokina stunned the top-ranked Serb 6-3, 6-7 (5), 6-1 in the second round to hand Djokovic another setback as he tries to move on from the controversy surrounding his refusal to get vaccinated against COVID-19.

It makes for rare back-to-back losses for Djokovic, who had not played since being eliminated in the quarterfinals of the Dubai Tennis Championships in Febrary – his only previous tournament this year after he was barred from playing at the Australian Open.

Djokovic struggled from the start as the 46th-ranked Spaniard broke him early to pull ahead 4-1 before another break handed him the first set. Davidovich Fokina kept up the pressure and led 3-0 in the second before Djokovic clawed back. But the Serb continued to struggle on his serve and was broken three times in the decider.

Djokovic had beaten Davidovich Fokina in straight sets twice last year, in Rome and at the Tokyo Olympics.

Djokovic could not defend his Australian Open title in January after he was deported from the country for not being vaccinated. He had to skip tournaments in Indian Wells, California, and Miami because he couldn’t travel to the United States for the same reason.

The authorities in France and Monaco lifted most COVID-19 restrictions last month, allowing people who aren’t vaccinated into the country and back into restaurants, sports arenas and other venues.