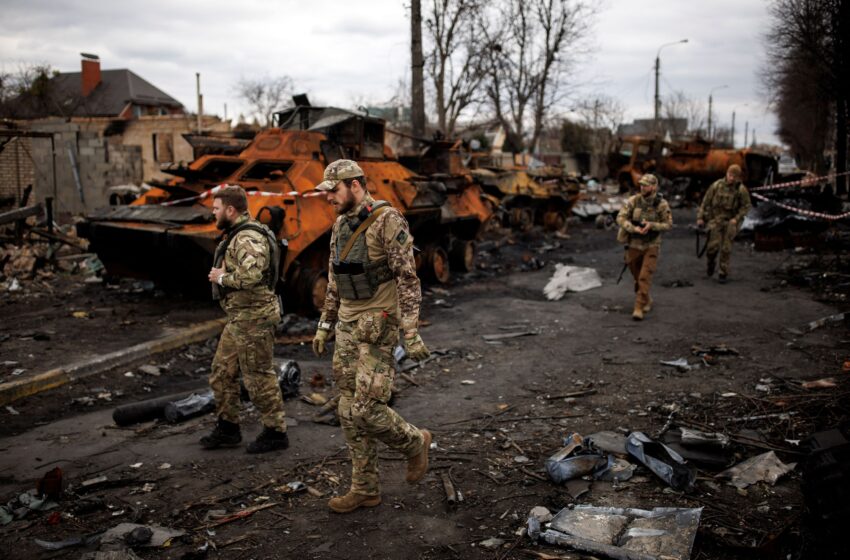 Desperate Ukraine tells U.S. ‘bureaucracy’ is no excuse for failing to provide critical weapons and ammunition

A monument to Taras Shevchenko is seen near a residential building destroyed by the russian army shelling in Borodyanka, Kyiv Region, north-central Ukraine.

WASHINGTON – A Ukrainian delegation warned U.S. officials in Washington this week that security assistance packages are not arriving quick enough in the besieged country, a plea that comes amid Western security claims that the Kremlin will soon intensify its military campaign.

Over the past week, the delegation of Ukrainian civil society advocates, military veterans and former government officials met with 45 lawmakers, including House Speaker Nancy Pelosi, officials at the departments of State and Defense and the National Security Council at the White House.

“It’s the 44th day of the war that we were supposed to lose on the third day,” began Daria Kaleniuk, who runs Ukraine’s Anti-Corruption Action Center, a national organization that assists Ukraine’s parliament and prosecutor’s office.

“What we need now is to arm our military and our territorial defense units to be able to prevent more graves in the backyards of innocent people,” she said on Friday.

“The six-year-old boy who is visiting his mother’s grave in his backyard does not want to hear about bureaucracy as an excuse for not delivering weapons to Ukraine,” Kaleniuk said.

In the courtyard of their house, Vlad Tanyuk, 6, stands near the grave of his mother Ira Tanyuk, who died because of starvation and stress due to the war, on the outskirts of Kyiv, Ukraine, Monday, April 4, 2022.

Earlier in the week, Ukrainian Foreign Minister Dmytro Kuleba also made a plea to NATO allies to catalyze the delivery of their arms commitments.

“Either you help us now, and I’m speaking about days not weeks, or your help will come too late,” Kuleba told reporters at NATO’s headquarters on April 7.

“I have no doubt that Ukraine will have the weapons necessary to fight. The question is the timeline. This discussion is not about the list of weapons. The discussion is about the timeline when do we get them and this is crucial,” he said, adding “people are dying today, the offensive is unfolding today.”

“They’re coming forward with new systems that they think would be helpful and effective,” Blinken said from NATO’s headquarters.

“We put our own expertise to bear, especially the Pentagon to help determine what indeed we think could be effective. What Ukrainians will be ready to use as soon as they get it, and what we actually have access to and can get to them in real-time,” he said, adding that the U.S. is working expeditiously to get appropriate weapons to Ukraine.

“Our point is, give Ukraine what it needs, what it asks, period,” explained Olena Tregub, Ukraine’s former director for international assistance at the Ministry of Economic Development and Trade.

“We need strike drones, long-range and medium-range strike capabilities because as we sit here with you the Russians are moving huge columns, huge forces into the southeast of Ukraine,” Tregub said.

Western intelligence reports have recently assessed that Russian forces will soon focus their military might in eastern and southern Ukraine after weeks of stalled ground advances on the capital city of Kyiv.

In the past six weeks, Russian forces on the ground in Ukraine have been beset with a slew of logistical problems on the battlefield, including reports of fuel and food shortages as well as frostbite.

“When Russia started this war, its initial aims were to seize the capital of Kyiv, replace the Zelensky government and take control of much if not all of Ukraine,” national security advisor Jake Sullivan told reporters at the White House on April 4.

Sullivan said that U.S. officials believed the Kremlin is now revising its goal in the war.

A senior U.S. Defense official, who spoke on the condition of anonymity in order to share new details from the Pentagon, said Russian troops once near Kyiv are currently being resupplied with additional manpower in Belarus.

An woman walks in front of destroyed buildings in the town of Borodianka on April 6, 2022, where the Russian retreat last week has left clues of the battle waged to keep a grip on the town, just 50 kilometres (30 miles) north-west of the Ukrainian capital Kyiv.

“We need protection for our sky,” said Maria Berlinska, a Ukrainian military veteran who fought in the conflict in Donbas. She asked U.S. lawmakers during a round-robin of meetings in Washington, D.C., for “serious weapons,” including middle-range surface-to-air missile systems, jets, tanks and armored vehicles.

“We are almost out of ammunition. If you don’t have ammunition you can’t do anything,” she said, adding that Russian President Vladimir Putin’s war will likely spill over Ukraine’s borders.

“It’s very naive to think that if Putin will take Ukraine he will stop,” added Berlinska, who trains Ukrainian military volunteers in aerial reconnaissance.

“If we don’t win this war, then it will be fought on NATO territory because Putin will not stop. He has larger plans and he has to be stopped in Ukraine,” she warned.

Ukrainian soldiers walk next to destroyed Russian tanks and armored vehicles, amid Russia’s invasion of Ukraine, in Bucha, in Kyiv region, Ukraine, April 6, 2022.

Since Moscow’s Feb. 24 invasion, the Biden administration has deployed more than 100,000 U.S. troops to NATO-member countries and authorized $1.7 billion in security assistance.

In addition, the NATO alliance has readied more than 140 warships as well as 130 aircraft on heightened alert. Meanwhile, NATO has consistently warned Putin that an attack on a NATO member state will be viewed as an attack on all, triggering the group’s cornerstone Article 5.

Ukraine, which has sought NATO membership since 2002, is bordered by four NATO allies: Poland, Slovakia, Hungary and Romania. Poland currently hosts the majority of the troops from the 30-member alliance and has thus far taken the lion’s share of refugees fleeing Putin’s war.

“I think we’ve proved to the world that we are not going to surrender because we know that if we surrender there will be concentration camps. Putin is not even hiding what he is going to do with Ukrainians,” the Anti-Corruption Action Center’s Kaleniuk said.

“It’s a genocide, the elimination of an entire nation and I’m not exaggerating,” she added.

The UN has confirmed 1,793 civilian deaths and 2,439 injuries in Ukraine since Russia invaded its ex-Soviet neighbor on Feb. 24.