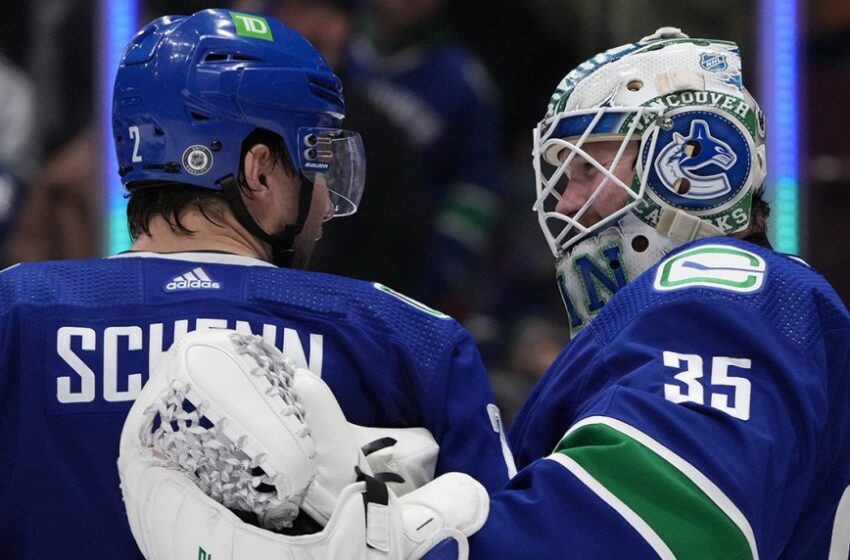 Thatcher Demko made 34 saves for the Canucks (35-28-10), reaching the 30-win mark for the first time for his career. In the Sharks net, Kaapo Kahkonen made 35 saves, but saw his record drop to 0-3-0 since he was acquired from the Minnesota Wild at the March 21 trade deadline.

Power-play opportunities were plentiful for both sides in the game, but after going 4-for-5 with the man advantage in their last two games, Vancouver was 0-for-7 on Saturday. San Jose went 1-for-5, with Hertl’s goal scored during a two-man advantage in the first period.

Vancouver opened the scoring just 2:03 into the first period. Dickinson intercepted an errant pass from Sharks defender Ryan Merkley near centre ice, then streaked down the right wing, deked Kahkonen and deposited the puck into the back of the net. It was his fourth goal of the year and his first since returning to action earlier this week, after missing 16 games with a lower-body injury.

At 7:34, Hertl tied the score with the Sharks on a 5-on-3. He banged the rebound of a Timo Meier shot past Demko from close range for his 28th goal of the year.

The Canucks made the score 2-1 at 4:49 of the second period. Alex Chiasson corralled a puck in the defensive zone. Conor Garland received the pass while in full flight on the left wing, then beat Kahkonen high to the blocker side for his 15th of the year, and first goal in 20 games.

With 1:23 left to go in the middle frame, Nick Bonino deftly deflected a Brent Burns point shot from deep in the slot past Demko for his third goal in four games and 11th of the year.

Just 2:15 into the third, Alex Chiasson put the Canucks back ahead, tipping a pass from Horvat past Kahkonen. The goal was his third in two games and his second point of the night, and gave both him and Horvat six points in the last three games.

The Sharks pulled their goalie with 2:11 left to play. After a pair of icing plays by Vancouver, the Sharks generated a number of good scoring chances before Tyler Myers was called for cross-checking with 39.3 seconds left in regulation but the Canucks held the fort, with Schenn hitting the empty net with one second left on the clock.

With the win, the Canucks move within four points of the second wild-card spot in the NHL’s Western Conference. They’re four points behind both the Dallas Stars and the Vegas Golden Knights.

NOTES: Saturday marked the Sharks’ first visit to Rogers Arena since Jan. 18, 2020. With the win, Vancouver swept their three-game season series against San Jose … Defenceman Quinn Hughes returned to the Vancouver lineup after missing two games due to illness … Both teams dressed lineups of 11 forwards and seven defencemen; Brad Hunt skated as a forward for Vancouver, and Radek Simek for San Jose … The Sharks are in the midst of a search for a new general manager after Doug Wilson announced on Thursday that he’d be stepping aside due to a medical issue … Saturday’s game was the first of a five-game homestand for Vancouver; San Jose began a five-game road trip … The Canucks celebrated Community Heroes Night.