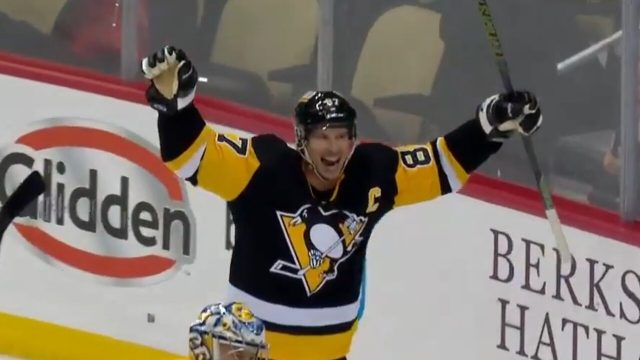 PITTSBURGH — Sidney Crosby scored the second of his two goals at 2:21 of overtime for his 1,400th career point, helping the Pittsburgh Penguins snap a four-game losing streak with a 3-2 victory over the Nashville Predators on Sunday.

Crosby added an assist in his 1,100th game, becoming the seventh-fastest player in NHL history to reach the 1,400-point milestone. It was also Crosby’s 77th game-winning goal, one behind Evgeni Malkin and Jaromir Jagr for the most in team history.

On his latest winner, Crosby got a pass from Rikard Rakell and tipped it behind David Rittich near the post.

Jason Zucker also scored in regulation and Rakell assisted on all three goals for the Penguins, who have only three wins in their last 10 games. Casey DeSmith stopped 33 shots for Pittsburgh, which regained a four-point advantage over Washington for third place in the Metropolitan Division.

Matt Duchene and Nick Cousins had goals for Nashville, which lost its second straight. The Predators have dropped three of their last five after recently winning 11 of 17 overall. Rittich made 27 saves.

Cousins gave Nashville a 2-1 lead at 4:31 of the third period when he sent a failed Pittsburgh clearing attempt over DeSmith’s shoulder from the slot.

Zucker tied it for Pittsburgh at 8:53 of the third when he took a pass from Crosby and sent a backhander behind Rittich from the slot. It was his first goal since Jan. 17, as he recently returned after missing 40 of the last 42 games because of an injury.

Crosby opened the scoring at 4:58. Rakell created a turnover in the corner and fed Crosby, who ripped a one-timer behind Rittich from the left faceoff dot.

Duchene tied it with 11 seconds left in the first on a partial breakaway. The Penguins’ Marcus Pettersson fell on the play, creating the breakaway, as Duchene beat DeSmith with a forehand deke.

DeSmith kept the game tied at 1 through two periods as the Predators held an 18-4 shots advantage through 28 minutes. He made a desperation left pad save on Tanner Jeannot and a point-blank stop on Duchene during a Predators power-play.

Crosby passed Jari Kurri for 22nd place on the NHL’s career points list with his assist on Zucker’s goal.

At 1,400 points, Crosby is two behind Alex Ovechkin for 21st in league history. Only Mario Lemieux, Wayne Gretzky and Steve Yzerman reached 1,400 points with one franchise.

Crosby became the first player in franchise history to appear in 1,100 games with Pittsburgh and the fifth member of his draft class to hit the mark. Crosby has the seventh-most points through 1,100 games in NHL history — and sixth-most not including Lemieux, who did not play 1,100 career games.

The Predators opened the third period on the power play. Malkin was assessed a four-minute double minor after he cross-checked Mark Borowiecki in the face, drawing blood. Borowiecki, who wasn’t on the bench to start the third period, was given a slashing minor.

Pittsburgh’s Brian Boyle took a slashing minor during the penalty kill, giving Nashville a five-on-three for 35 seconds, but the Penguins killed off the early penalties.

NOTES: Duchene is tied with teammate Filip Forsberg for the single-season franchise record with both having a career-best 38 goals. … Mikael Granlund assisted on Duchene’s first-period goal and is one away from 300 in his career. … G Juuse Saros did not dress for the Predators because of a non-COVID-related illness. Connor Ingram was recalled from Milwaukee (AHL) and backed up Rittich.

Penguins: Travel to the New York Islanders on Tuesday.