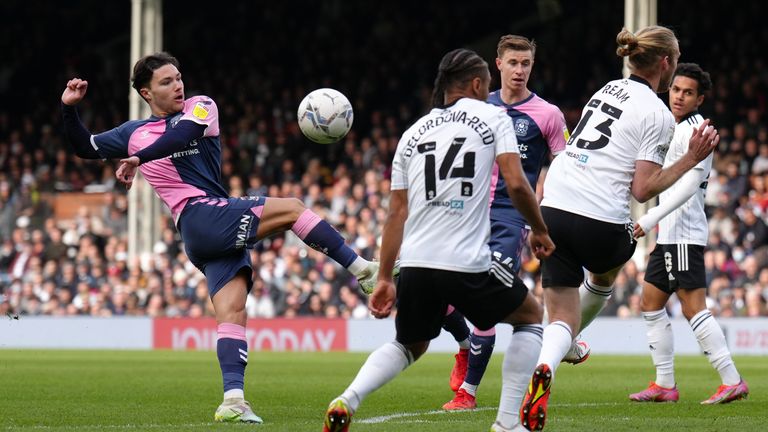 Victory for the Cottagers would have left them needing one more win to secure an immediate return to the Premier League.

But goals from Michael Rose and Viktor Gyokeres put Coventry 2-0 ahead at the break and, despite Fulham substitute Bobby Decordova-Reid pulling one back with eight minutes to go, Callum O’Hare netted a third in added time.

Coventry, 14th at kick-off but not entirely out of the play-off picture, were rewarded for showing plenty of attacking ambition, especially in the first half.

Fulham goalkeeper Marek Rodak was forced into the first save of the match when Rose met Gustavo Hamer’s free kick with a firm header.

Then Sky Blues captain Dominic Hyam nodded over the bar from another set-play, taken this time by Ian Maatsen.

So it was no surprise when the visitors went ahead after 20 minutes, with Rose’s glancing header from Hamer’s corner on the left appearing to take a touch off Fulham left-back Antonee Robinson on its way into the net.

And Craven Cottage was stunned as Coventry doubled their lead four minutes later.

Gyokeres, whose powerful running kept the Fulham defence at full stretch, cut inside Tosin Adarabioyo and shot hard and low but straight at Rodak. However, the keeper completely misjudged the bounce of the ball as it kicked off the turf in front of him and he could only help it into the net.

Coventry goalkeeper Simon Moore had to sprawl to his left to keep out a header from Aleksandr Mitrovic as Fulham looked to hit back.

But he was helpless as Neeskens Kebano hit the crossbar with a flying volley from a cross by Neco Williams.

Yet Fulham could count themselves lucky not to concede a third before half-time when Rodak failed to gather another corner and Ben Sheaf saw his shot charged down by Williams.

Fulham manager Marco Silva sent on Decordova-Reid at the break and almost immediately his cross was skewed inches past the post by Mitrovic.

Then Fabio Carvalho found space 10 yards out but glanced his header wide from Harry Wilson’s cross before Williams chanced his arm from 25 yards, only for Moore to claw the ball to safety.

Coventry were not finished as an attacking force and Maatsen’s shot was deflected over the bar by Williams, but it was Fulham who scored the third goal after 82 minutes.

Decordova-Reid started and finished it, sending fellow substitute Josh Onomah clear on the left and meeting his low cross with a first-time shot across Moore to score.

Now the Cottage found its voice, but the Coventry defence, excellent throughout, held firm, and in added time Hamer robbed Tim Ream and crossed for O’Hare to tap in the third.

There was still time for Carvalho to rattle the crossbar but even a goal then would have been no consolation.