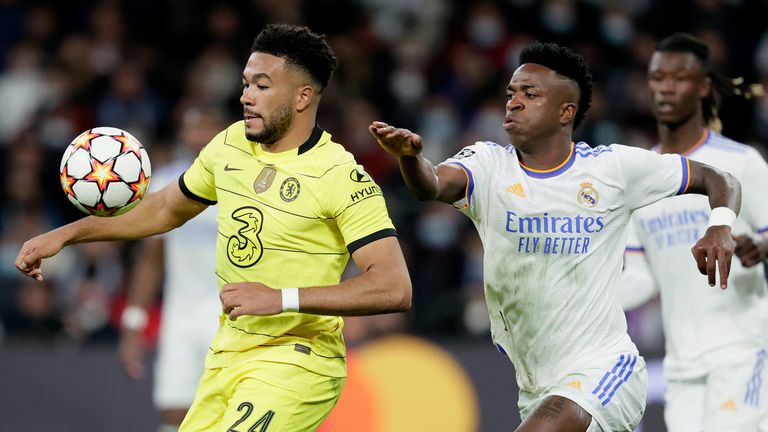 We don’t do managerial ratings here at Sky Sports – just ones for players – but if we did, Thomas Tuchel will have been close to a 10/10 for almost staging one of the greatest Champions League comebacks.

Chelsea had Real Madrid on the ropes, outplaying them for large parts and outthinking them for almost the majority. In their own back yard. That stemmed from Tuchel’s plan to play with bravery to hurt the La Liga leaders in the search for goals but to also keep Vinicius Jr and Karim Benzema quiet at the other end after the pair had completely destroyed them at Stamford Bridge in the first half. It worked a charm. 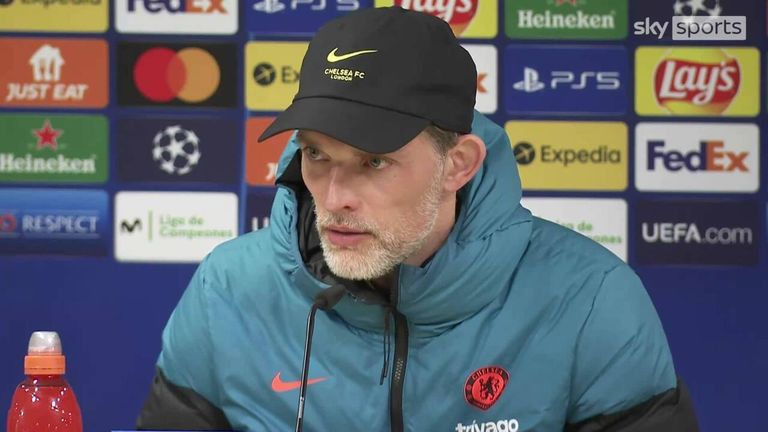 Thomas Tuchel says he was disappointed in seeing the referee smiling and laughing with Carlo Ancelotti after the game and feels it was bad timing.

A great manager needs great players to carry out such instructions though.

And, Tuchel has plenty of those at his disposal.

His side played with amazing discipline but also mixed that in with a pulsating energy all across the pitch that didn’t allow Real Madrid’s key players time to lift their heads and work their magic. OK, maybe they allowed such occasions twice.

It was just unfortunate that Luca Modric, Vinicius Jr and Benzema carry such quality that they are gifted enough to take those half chances. Modric’s ball for Rodrygo’s crucial goal to level the tie can takes you to football heaven every time you watch it.

There were other Chelsea heroes, too. Mason Mount ran until his legs couldn’t run no more and scored a fantastic goal, Ruben Loftus-Cheek adapted his game very skilfully to play in a diamond midfield and supported James when he needed to whilst Marcus Alonso provided his usual quality but backed it up with an error-free performance.

But it was James that stole the show.

His defensive prowess to suffocate the Brazilian despite being booked after just 10 minutes was bordering on ridiculous at times. He made eight tackles on the night – no other Chelsea player made more than four. That showed just how much defending the academy graduate was asked to deal with. Even when Benzema ventured into James’ area of the pitch, he was there to stop him, flicking the ball away from the striker with his toe to deny the Frenchman a clean strike at goal from eight yards out.

After the game, Benzema asked for James’ shirt, which said it all.
Lewis Jones

Arsenal fans may not have the fondest memories of Unai Emery but Villarreal’s latest European giant-killing serves as a reminder of his extraordinary pedigree in continental competition.

Villarreal’s Europe League triumph last May was the fourth of Emery’s managerial career and the 50-year-old deserves acclaim for transferring that success to the Champions League this season.

Villarreal pulled off a stunning 3-0 win away to Juventus to secure their spot in the last eight but their elimination of Bayern, a side sat nine points clear at the top of the Bundesliga, was even better.

Emery outmanoeuvred Julian Nagelsmann in the first leg and Tuesday’s second-leg performance, in the cauldron of the Allianz Arena, where Bayern had smashed 20 goals in their previous six games in all competitions, was even more impressive.

They defended impeccably, shutting off the spaces Bayern like to operate in and instead forcing them to resort to a succession of hopeful crosses from wide areas. Then, when they had chances to spring forward, they did so with confidence and conviction.

The word masterclass is bandied around too readily in modern football but Emery’s managerial performance over the two legs, against one of Europe’s strongest sides, must go down as one.

Bayern dominated possession and territory across the 180 minutes but Villarreal controlled and contained them in Spain and, save for a period of around 20 minutes after half-time on Tuesday night, they did the same in Germany.

Jurgen Klopp’s Liverpool are likely to be next, but they will hold no fear for Villarreal – not when they have a European specialist like Emery guiding the way.
Nick Wright

Bayern Munich’s tie with Villarreal ended in heartbreak for the German giants but not before Robert Lewandowski had shown once again why he is one of the world’s deadliest strikers – if not the deadliest.

The Pole had endured a frustrating first half up against Villarreal centre-backs Raul Albiol and Pau Torres, struggling to exert himself on the game, but when his chance arrived soon after half-time, he seized it in typically clinical style.

His goal, a low shot taken early which bounced into the net off the post, was his 13th in the Champions League this season, a remarkable total which may yet earn him the golden boot despite Bayern’s quarter-final exit.

It was also his 30th in the knockout stage of the competition, making him only the third player to reach that milestone behind Lionel Messi and Cristiano Ronaldo.

The question now, though, is whether he will continue his quest for Champions League glory at Bayern or elsewhere next season. Barcelona are strongly interested in signing him and they are unlikely to be his only suitors this summer.

Bayern’s early elimination from the competition he covets most won’t help them keep hold of him as he ponders his next step.
Nick Wright