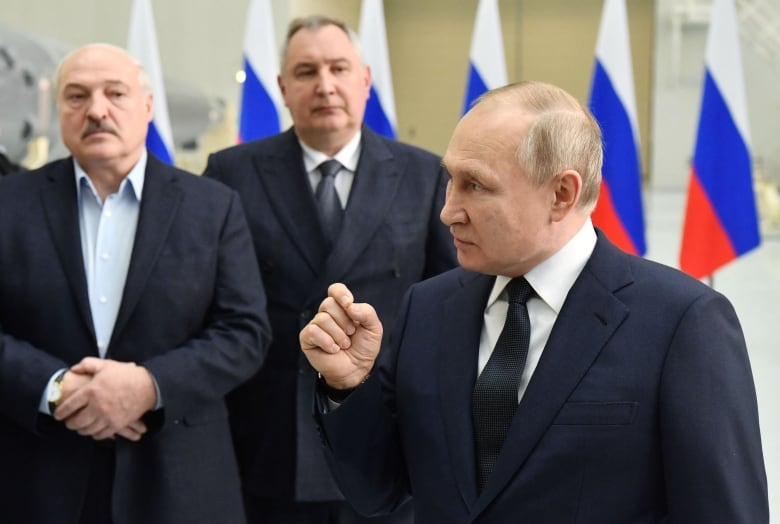 Biden refers to Russian invasion of Ukraine as ‘genocide’

U.S. President Joe Biden referred to Russia’s invasion of Ukraine as a “genocide” on Tuesday, the first time he’s publicly done so since the start of the war.

“Your family budget, your ability to fill up your tank, none of it should hinge on whether a dictator declares war and commits genocide a half a world away,” he said in Iowa, where he announced a modest step aimed at trimming gasoline prices.

Biden later stood by his characterization of Russia’s actions in Ukraine.

“I called it genocide because it has become clearer and clearer that [Russian President Vladimir] Putin is just trying to wipe out the idea of being able to be Ukrainian, and the evidence is mounting,” he told reporters as he prepared to board Air Force One to return to Washington, D.C., from Iowa.

“We’ll let the lawyers decide internationally whether or not it qualifies, but it sure seems that way to me,” Biden said.

A U.S. government report on Tuesday showed that consumer prices jumped 8.5 per cent in March from a year ago — the worst reading since December 1981. More than half the increase came from higher gas prices, which spiked in part because of Russia’s war in Ukraine, but costs also jumped for housing, food and other items.

Putin, who had largely vanished from public view since his forces were driven from the approaches to Ukraine’s capital, Kyiv, this month, resurfaced on Tuesday to defend his “noble” invasion of Ukraine and said peace talks had come to a dead end.

In a press event inside the Vostochny space base in the Russian Far East, six time zones from Moscow, Putin rattled off talking points: that Moscow had “no choice” but to intervene to protect separatists, defeat neo-Nazis and “help people.”

Russia’s economy was standing on its feet despite Western sanctions, he added, and said signs of war crimes allegedly carried out by Russian troops were fakes staged by the West. As for talks: “We have again returned to a dead-end situation for us.”

Putin was accompanied by his ally, Belarusian President Alexander Lukashenko, to mark the anniversary of Soviet success in launching the first manned space flight.

Asked by Russian space agency workers if the operation in Ukraine would achieve its goals, Putin said, “Absolutely. I don’t have any doubt at all.

“Its goals are absolutely clear and noble,” he said. “We didn’t have a choice. It was the right decision.”

Russia, he said, would “rhythmically and calmly” continue its operation.

Putin, who had been ubiquitous on Russian television in the early days of the war, has largely retreated from public view since Moscow pulled its forces out of northern Ukraine this month.

His only public appearance in the past week was at the funeral of a nationalist lawmaker, where he gave brief remarks and did not directly address the war. On Monday, he met the visiting chancellor of Austria at a country residence outside Moscow, but no images of that meeting were released.

In the strongest signal to date that the war will grind on for longer, Putin on Tuesday said Kyiv had derailed peace talks by staging what he said were fake claims of Russian war crimes and by demanding security guarantees to cover the whole of Ukraine.

“We have again returned to a dead-end situation for us,” he said.

Ukrainian presidential adviser Mykhailo Podolyak, when asked about the comments by Putin, said negotiations were very hard but they were continuing.

Podolyak also told Reuters that Russia was trying to put pressure on the talks with its public statements and that negotiations were continuing at the level of working sub-groups.

‘We don’t intend to be isolated’

The West casts Putin’s war as a land grab of a sovereign country. Putin calls it a “special military operation” to disarm Russia’s neighbour, describing Ukraine as a puppet of the United States.

In Tuesday’s remarks, he appeared to draw an analogy between cosmonaut Yuri Gagarin’s first space flight 61 years ago and Russia’s defiance of Western economic sanctions today.

“The sanctions were total, the isolation was complete, but the Soviet Union was still first in space,” said Putin, 69, recalling his own wonderment as a schoolboy learning of the achievement.

“We don’t intend to be isolated,” Putin said. “It is impossible to severely isolate anyone in the modern world — especially such a vast country as Russia.”

Lukashenko also dismissed the impact of sanctions. “Why on earth are we getting so worried about these sanctions?” he said.

Russia’s Cold War-era space successes, especially Gagarin’s flight and the 1957 launch of Sputnik 1, the first artificial satellite, were depicted by Soviet leaders as proof of their system’s superiority.

Last year, Russia’s nominal GDP was $1.6 trillion US — smaller than Italy’s — and about seven per cent of the $22.9-trillion economy of the U.S.

Russia’s economy is on track to contract by more than 10 per cent in 2022, the worst since the years following the 1991 fall of the Soviet Union, former finance minister Alexei Kudrin said on Tuesday.