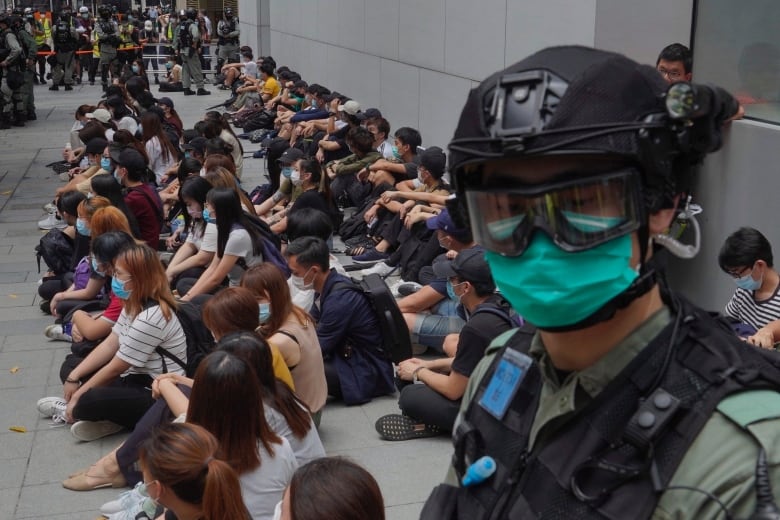 This column is an opinion by Matt Malone, a research associate at the Centre for Law, Technology and Society at the University of Ottawa. For more information about CBC’s Opinion section, please see the FAQ.

Members of the Canadian legal community are not shy about sharing their opinions on Twitter. But when it comes to one issue, they tend to be surprisingly quiet:  it is long past time for the Right Honourable Beverley McLachlin, the former chief justice of the Supreme Court of Canada, to step down as a non-permanent judge on the Hong Kong Court of Final Appeal.

Even though this is a truth worth telling, few in the Canadian legal community seem willing to tell it.

McLachlin is one of 10 judges from overseas jurisdictions like the United Kingdom and Australia who sit as non-permanent members of Hong Kong’s highest court. This arrangement — which replaced the process under British rule that allowed judgments to be appealed to a higher court in London — was agreed to by China and Britain during the transfer of sovereignty over Hong Kong in 1997.

It is difficult, in all fairness, to be surprised about everything all of the time. But McLachlin’s continuing presence on the special administrative region’s highest court — the very institution charged with maintaining the rule of law — surprises precisely because it lends her credibility (and Canada’s) to China’s program to dismantle democracy and the rule of law in Hong Kong.

That is precisely why Canadians should care. McLachlin is a representative of the Canadian legal community like no other. The longest-serving chief justice of the Supreme Court of Canada, she is one of only 15 living Canadians styled as the “Right Honourable.” She is a companion of the Order of Canada, its highest rank. The imprimatur of these credentials is intimately woven with the brand, reputation, and values of Canada. It is troubling to see them deployed in this way here — even as warning signs have been flashing since McLachlin assumed her position on the Hong Kong court in 2018, when she retired from the Supreme Court of Canada.

First, and most obviously, there were the dramatic protests that shook Hong Kong in 2019 and 2020, as the world watched Hong Kong’s civil society resist the proposed passage of the Fugitive Offenders amendment bill on extradition by the government of Hong Kong, followed by China’s passage of the Hong Kong national security law. These peaceful protests were met with brutal crackdowns and waves of arbitrary arrests that have only been continuing.

Second, last summer China’s Director of the Office for Safeguarding National Security made a public speech stating openly and clearly that he expected the judiciary of Hong Kong to reflect the will of China. The speech clearly signaled the end of the independence of the judiciary in Hong Kong. This is a ​clear violation of a core tenet of the rule of law.

Third, other judges who are McLachlin’s peers on the court have been stepping down in a steady wave of protest. Lord Reed (the president of the United Kingdom Supreme Court) and Lord Hodge (the deputy president of the same court), who both sat as non-permanent judges on the court, stepped down last Wednesday. Their action followed the resignation of the former chief justice of New South Wales, James Spigelman, who stepped down two years ago.

Finally, when McLachlin’s opportunity came to step down at a quiet diplomatic interval — at the end of her three-year term in July 2021 — many expected her to do so. Instead, McLachlin renewed her position for another three years, even after some in the Canadian legal community sought to raise concerns about the propriety of her sitting on the court.

Her reappointment also occurred against the fraught backdrop of the arbitrary detention of Michael Spavor and Michael Kovrig by China. The two Michaels had been detained for nothing other than being Canadian — turned into effective bargaining chips in a geopolitical act of retaliation for Canada’s detention of Meng Wanzhou, who was detained in compliance with an extradition treaty with the United States.

To be fair, McLachlin, who is a keen participant in and observer of public discourse, is not unaware of these developments. As she told one Canadian newspaper last year: “I’ve given these things a lot of thought. I tried to make my decision on the basis of principle.” She also noted that if the independence of the court was “challenged in any way that is inconsistent with my principles, then I’m gone. I’m sorry.  I won’t be part of it.”

For a chief justice who took an important and brave role in so many of the critical issues of our country over the last four decades — including bravely uttering the word “genocide” to describe the history of Canada toward the First Nations, back when it was politically sinful and a brave thing to do — it is sad to watch her argue that the chain of events unfolding in Hong Kong is still consistent with her principles. She now sits on a court whose independence from a regime presently being accused of genocide is only thinly veiled.

Likewise, it is sad to watch so many in the Canadian law community impose an oath of silence on themselves when it comes to voicing criticism of McLachlin in this instance. While Canadian lawyers, law professors, and law students eagerly dispute the arcana of Supreme Court decisions with fervour, they have engaged in a strange act of self-muting when it comes to voicing any criticism about this failure of judgment by Canada’s former highest judge. ​In fact, McLachlin is a marquee speaker at Ryerson’s School of Law for an event this month on humanitarian crises happening abroad.

Truth Be Told was the name of McLachlin’s award-winning memoir recounting her unique and path-breaking journey in the law. Her legacy is, in so many ways, the country’s. This is exactly why it is devastating to see her exercise such poor judgment in continuing to sit on the Hong Kong court when it is most necessary for her to act and to speak truth to power. The same goes for the many in the legal community who have been willing to give her a pass. Even if the only cases coming to the Hong Kong court were merely commercial or business in nature — and that is not the case — it is time for those of us in the Canadian legal community to tell the truth.

She should step down.

Do you have a strong opinion that could add insight, illuminate an issue in the news, or change how people think about an issue? We want to hear from you. Here’s how to pitch to us.