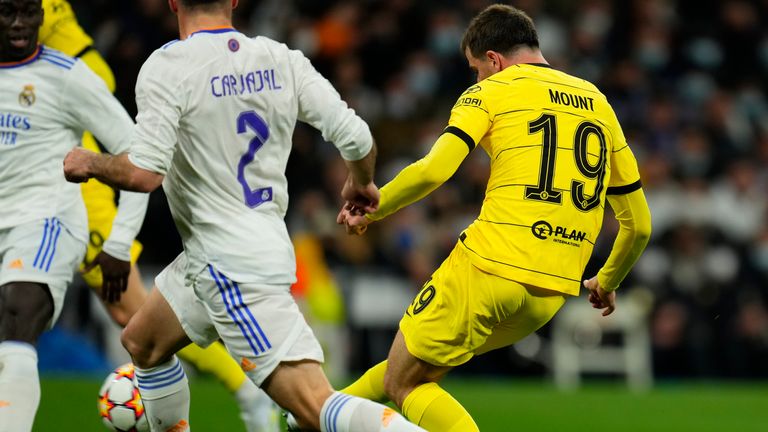 Karim Benzema was Chelsea’s tormentor once again as his extra-time header earned Real Madrid a spot in the Champions League semi-finals with a 5-4 aggregate victory.

A thrilling evening of football at the iconic Santiago Bernabeu saw the west Londoners overturn their 3-1 deficit to lead 4-3 on aggregate thanks to a stunning comeback, before Real levelled through Rodrygo’s late goal to force extra-time.

Mason Mount swept Chelsea in front after 15 minutes to give the Blues a deserved half-time lead, before Antonio Rudiger and a brilliant Timo Werner solo goal gave Thomas Tuchel’s brave side the advantage on aggregate.

Before Werner’s strike to make it 3-0, Chelsea also had a Marcos Alonso goal ruled out by VAR due to a handball in the build-up, but the Blues were pegged back when a stunning Luka Modric pass was met by substitute Rodrygo, who fired in from close range to force extra-time.

It was Vinicius Jr and Karim Benzema who linked up again in the additional period – just like they did with devastating effect in the London first leg – with the latter heading home his fourth goal of the tie to earn Carlo Ancelotti’s side a spot in the last four.

Needing at least a two-goal win to stay alive in the Champions League, Tuchel continued with Ruben Loftus Cheek in the wider-than-midfield role he adopted in the 6-0 win at Southampton at the weekend – and it was the 26-year-old who played a key supporting role in Chelsea’s first-half opener.

Loftus-Cheek was involved in a swift midfield move with Mateo Kovacic and Werner that saw the ball break to Mount on the edge of the penalty area, with the England international sweeping an effort past Thibaut Courtois to stun the Bernabeu.

Just before that goal, Benzema and Vinicius were threatening to show the link-up play that put them 3-1 ahead in the first leg, with the latter winning a free-kick on the edge of the area following a cheeky nutmeg on Reece James, though his strike partner spooned the set piece over.

Yet Chelsea continued to pepper the Real goal with Kovacic firing over from 25 yards out in what was the Blues’ sixth shot on goal before the 30th minute. Rudiger followed up with a similar long-range effort that went wide, but had Courtois scrambling.

It was the Chelsea fans who could be heard above the nervous murmurs of the home crowd as Real went into the half-time break without a shot on target to their name – the first time the Spanish side have fired a blank of this sort in the Champions League since Opta first recorded stats.

Those away supporters’ cheers raised to a new volume after the break – after more sustained pressure led to the scores being levelled.

James’ shot from the edge of the box appeared to take a deflection off Modric for a corner – which the Blues used to good effect. Defender Rudiger met the set piece and headed it into the opposite corner to level the tie.

Real tried to respond shortly after the added setback as Benzema failed to connect for a shot on goal at Edouard Mendy, before Toni Kroos stung the Chelsea goalkeeper’s palms with a fierce free-kick. The visitors, meanwhile, showed their counter-attacking qualities as Kai Havertz hit the side-netting on the break. That quick thinking on the break nearly led to Chelsea’s third.

Mount and Havertz won the ball high up the pitch and released N’Golo Kante on the counter. He fed Marcos Alonso who lashed past Courtois – but the smallest of deflections off his arm in the build-up allowed VAR to rule it out.

After being denied a potential winner, Chelsea nearly found themselves behind as Benzema headed a cross from the left onto the bar. But then came Werner’s moment of magic as some excellent feet from Kovacic allowed him to release the German, who evaded challenges from Casemiro and David Alaba to squirm the ball past Courtois and spark jubilant scenes.

It could have been four for Chelsea but Courtois kept out Havertz’s bullet header from a corner. But soon the tie was levelled – this time by the hosts – as a stunning outside-of-the-boot pass from Modric found Rodrygo in the box and the Real substitute finished well from close-range.

Blues substitute Christian Pulisic had two golden chances in injury time to earn a Chelsea winner but he spooned two efforts over the bar after winning the ball from two free-kick knock downs – and the game went to extra-time.

Despite Chelsea starting brightly through James’ fierce shot that went over, it was Real who took a first-half lead in extra-time when Vinicius burst down the left and crossed, with Benzema taking advantage of a slip from Rudiger in the box to head home past Mendy.

Chelsea did manage to muster many more chances in extra-time, with Hakim Ziyech stinging the palms of Courtois at his near post along with spurned chances from Havertz and Jorginho, but the tired Blues legs could not muster another goal to keep themselves at Europe’s top table this season.

What’s next for Chelsea & Real Madrid?

Chelsea head to Wembley on Sunday for their FA Cup semi-final against Crystal Palace; kick-off at 4.30pm. Thomas Tuchel’s side then play host to Arsenal at Stamford Bridge in the Premier League on Wednesday, live on Sky Sports Premier League from 7pm; kick-off at 7.45pm.

La Liga leaders Real Madrid head to third-placed Sevilla on Sunday – behind second-placed Barcelona only on goal difference – boasting a 12-point advantage at the top of the table, before a trip to mid-table Osasuna on Wednesday.