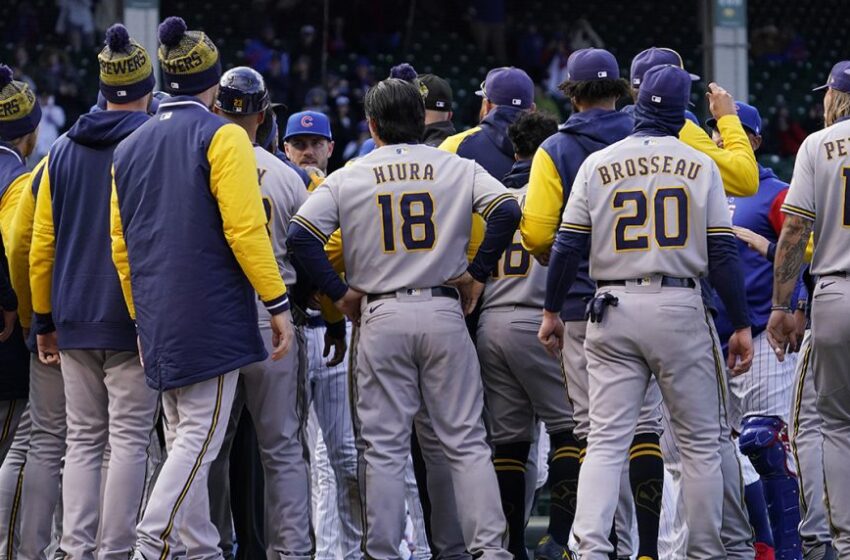 CHICAGO — Seiya Suzuki drove in three runs for his first big league RBIs and the Chicago Cubs beat the Milwaukee Brewers 9-0 Saturday for a testy win during which five batters were hit by pitches and the benches cleared.

The teams exchanged words but no punches in the eighth after Andrew McCutchen was hit by a pitch from Cubs reliever Keegan Thompson, who was ejected for the first time in his career.

As McCutchen slowly headed to first base while looking at Thompson, players from both bullpens ran onto the field.

Three Cubs were hit by pitches. Ian Happ exited for a pinch-runner in the seventh after he was struck on the knee on a pitch by Trevor Gott. Brandon Woodruff hit Willson Contreras in the fourth and Nick Madrigal in the first. Contreras also was hit by a pitch in Thursday’s season opener.

Ethan Roberts made his major league debut in the ninth for Chicago and hit Christian Yelich with a pitch.

Suzuki, a Japanese outfielder who signed an $85 million, five-year contract as the Cubs’ biggest offseason acquisition, had a sacrifice fly, a bases-loaded walk and a single. Happ and Frank Schwindel added two hits apiece for the Cubs, who began a season 2-0 for the first time since 2016.

Justin Steele (1-0) struck out five in five scoreless innings for the rebuilding Cubs. The left-hander was 4-4 with a 4.26 ERA in his first major league season in 2021.

Woodruff (0-1) struggled for the reigning NL Central champions. The right-hander allowed seven runs, six hits and three walks, striking out two in 3 2/3 innings for his shortest outing since Aug. 12, also against the Cubs.

Both starting pitchers were pushed back a day because of Friday’s rainout.

Woodruff began his start with a leadoff walk, hit a batter and walked two more to bring in a run. After another run scored on a grounder, Suzuki’s sacrifice fly made it 3-0.

Suzuki also drove in runs on a single in the third and a bases-loaded walk by Jose Urena in the fourth. Suzuki singled for his first big league hit in his major league debut Thursday.

Patrick Wisdom hit a two-run infield single in the sixth.

RHP Freddy Peralta (10-5, 2.81 ERA) is scheduled to start for the Brewers against the Cubs and RHP Marcus Stroman in Sunday’s series finale. Stroman was 10-13 with a 3.02 ERA with the Mets last season.