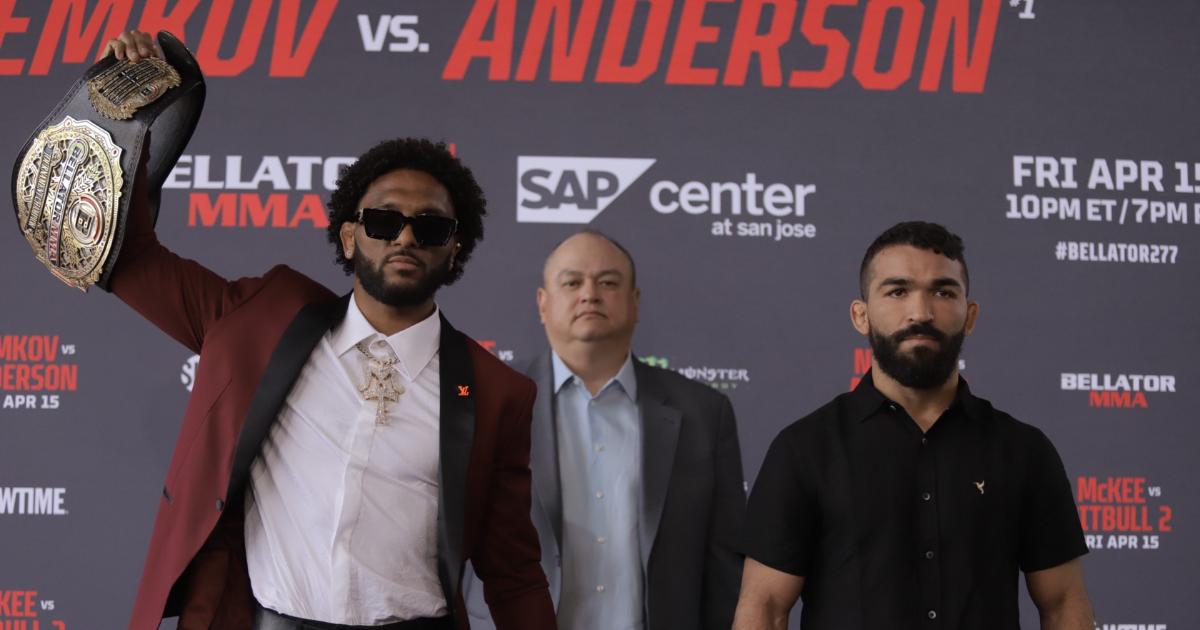 Less than a year after A.J. McKee made history, he is looking to go 2-0 against Patricio “Pitbull” Freire. The two will battle it out for the Bellator featherweight title on April 15 at Bellator 277 from inside the SAP Center in San Jose, California.

Son of Antonio McKee, A.J. made his pro debut in 2015. A true Bellator prospect, McKee would beat Georgi Karakhanyan, Derek Campos, and Darrion Caldwell in a Featherweight Grand Prix that lasted from 2019 to 2021.

“Pitbull” made his pro debut in 2004. Joining Bellator in 2010, Freire is a two-time featherweight and one-time lightweight champion. Owner of the most wins in Bellator history, “Pitbull” beat Juan Archuleta, Pedro Carvalho and Emmanuel Sanchez in the Grand Prix.

At Bellator 263 in July 2021, McKee forced “Pitbull” to tap out during the Grand Prix finals. He won the title and the $1 million prize. Focusing on the rematch, Freire relinquished the lightweight title he won against Michael Chandler in 2019.

A four-time gold medalist in the World Championships, Nemkov made his MMA debut in 2013. Joining Bellator in 2017, Nemkov is 7-0 for the promotion. He beat Ryan Bader in 2020 for the Bellator light heavyweight title. During the Light Heavyweight Grand Prix, he beat Phil Davis and Julius Anglickas.

A winner of The Ultimate Fighter 19 in 2014, Anderson lost his last UFC bout against Jan Blachowicz in 2020. Anderson joined Bellator and is 3-0 for the promotion. He beat Dovletdzhan Yagshimuradov and Bader in the Grand Prix.

The Sporting News has a full rundown of Bellator 277, including schedule, matchups, start times, odds and more for McKee vs. “Pitbull” 2 and the entire card.

Bellator 277 takes place on Friday, April 15. The YouTube prelims will start at 7 p.m. ET, and the main card begins at 10 p.m. ET. McKee and Freire should make their way to the cage at around midnight ET, depending on how long the undercard fights go.

Bellator 277 will start with the prelims on YouTube. In the U.S., the main card will be airing live on Showtime.

Bellator 277 will be taking place inside the SAP Center in San Jose, California. Home of the San Jose Sharks, the building can hold up to 17,500+ people.

McKee vs. Freire 2 odds for Bellator 277

According to Bovada, McKee is the -325 favorite over Freire, the +240 underdog.

Nemkov vs. Anderson odds for Bellator 277

According to Bovada, Nemkov is the -185 favorite, while Anderson is the +140 underdog.