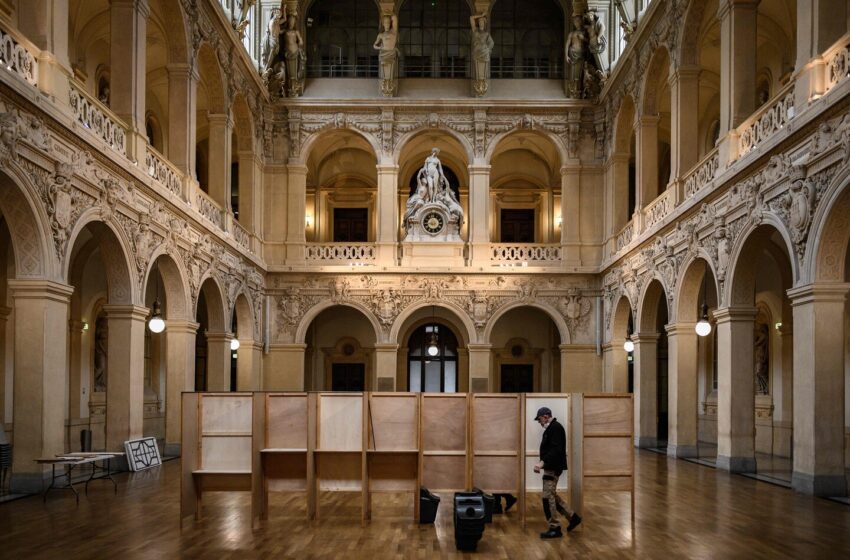 PARIS — France is voting in the first round of a presidential election that polls suggest could be uncomfortably close for President Emmanuel Macron. Here’s what to know:

Macron had been well ahead in the field of 12 official candidates, but a late surge of support for far-right leader Marine Le Pen has cast uncertainty over whether the centrist politician elected as France’s youngest president in 2017 can claim a second term.

Only three candidates — Macron, Le Pen and far-left politician Jean-Luc Mélenchon — have a realistic chance of qualifying for the second and decisive round on April 24, when the top two candidates will run against each other.

The latest polling averages, of surveys conducted before this weekend, showed 26 percent of voters intend to choose Macron in the first round, 23 percent Le Pen and 17 percent Mélenchon, according to NSPPolls, a platform that compiles French election polls. All other candidates polled in the single digits.

Barring a major polling error, Macron should be able to make it into the second round. But he is expected to face a bigger challenge than when he trounced Le Pen by more than 30 percentage points in the 2017 presidential runoff. Polls predict he would now only win by a small margin of four to six percentage points — a sign of dissatisfaction with his presidency and concern about the rising cost of living.

Explainer: What to know about the French presidential election of 2022

Macron has taken on an elevated international role during the war in Ukraine, serving as an interlocutor with Russian President Vladimir Putin and a leading voice for the European Union and NATO. Russia’s invasion has also shaken Europe’s sense of security. And so, as a wartime leader, Macron initially saw a boost in public support.

But that lift evaporated over the past two weeks — usually the most intense period in France’s relatively short campaign season.

At the same time, support for Le Pen climbed rapidly, as she won over voters who had been considering her main far-right competitor, Éric Zemmour.

Six weeks before the election, it looked like she might not even collect enough signatures to get on the ballot. But she campaigned hard, portraying herself as a more moderate figure than in the past. Since Russia’s invasion of Ukraine, she has distanced herself from Putin and modified her hard-line stance on immigration to make an exception for Ukrainian refugees.

Macron held only a single large campaign rally and didn’t engage in any direct debates with his competitors. As a candidate, he didn’t deliver any of the big-vision speeches for which he is known.

Although it is not uncommon for French incumbents to avoid the campaign trail, that strategy may not have helped his reputation in the eyes of people who see him as an elitist politician out of touch with the concerns of everyday people.

“When you’re a candidate who decides to do a short campaign, you have to have a perfect campaign. You have to be clear, you have to be strong and have a proper platform,” said Vincent Tiberj, a researcher with Sciences Po Bordeaux.

Macron has particularly alienated voters who opposed his shift to the right on issues such as national security and who were disappointed with his efforts to fight climate change.

A major unknown in Sunday’s vote is abstention, which could reach a record high, according to analysts, and may complicate polling institutes’ predictions.

In the past, high abstention rates have often been most pronounced among far-right voters, and Le Pen’s party, National Rally, performed below expectations in regional elections last year.

But the dynamics of French presidential elections are often also driven by frustrations with the incumbent, and Le Pen has sought to channel public anger with Macron’s policies into a historic vote share for the far right.

Experts have cautioned, too, that support for far-left candidate Mélenchon could be higher than indicated in polls, largely because left-leaning voters may spontaneously drop their candidates, many of whom are polling in the low single digits, and decide to coalesce around him.

French law bans all campaigning after Friday at midnight, and candidates worked until the very last moment to encourage their supporters to vote.

“On Sunday, France will speak to the world. Vote!” Mélenchon posted on Twitter with minutes to spare.

Le Pen, who is running for the third time for the French presidency, wrote that she is “ready to lead the country.”

Throughout the campaign, she largely avoided emphasizing her most controversial proposals and instead focused on echoing popular concerns over the economy and rising inflation. But in their substance, many of Le Pen’s positions are as radical as they were five years ago. This past week, she vowed to issue fines to Muslims who wear headscarves in public.

“But she didn’t move,” Tiberj said.

Macron and his allies have in recent days tried to impress upon their supporters that they should not be overly confident that he will win, and that Le Pen’s efforts to mask her radical ideas could still succeed at the polls.

“Don’t believe the commentators or the opinion polls who say it’s impossible, unthinkable,” Macron warned last weekend, before his lead in the polls shrank from six to three percentage points.

“Her program will create massive unemployment. … She’s lying to people,” Macron told the Parisien newspaper. In the same interview, he accused her of pursuing a “racist manifesto” and said Le Pen’s plans would effectively mean France would have to leave the E.U.

But Macron has struggled to build the same momentum against Le Pen as in 2017.

“It has surprised me, because it’s not very logical,” said Emmanuel Rivière, director of international polling at Kantar Public, a data analytics firm.

A relatively high number of French people, “43 percent, said they trust Emmanuel Macron as a president to face the main issues,” he said, adding that Le Pen’s past proximity to Putin should in theory also have damaged her position and helped Macron.

Rivière cited weakening resistance to the idea of a Le Pen presidency within parts of the electorate and a “very deeply rooted tradition of French voters firing the incumbent each time we have the opportunity” as potential reasons for Macron’s surprisingly weak standing in the polls.

Another cause for concern for Macron’s team may be that he has disappointed large parts of the left-leaning electorate by shifting to the right on issues such as immigration and national security over the past five years.

That could become a particular problem in a runoff against Le Pen. Polls suggest some left-leaning voters may choose to abstain, even if it means a far-right victory.

The question of how to vote in such a second-round scenario loomed large ahead of the first round. In Amiens, Macron’s hometown that overwhelmingly voted for him five years ago, left-leaning voters were torn on Saturday.

Marie Raoult, 61, said she approved of Macron’s handling of the coronavirus pandemic, from which France’s economy has emerged less scathed than initially feared.

While she said she certainly won’t vote for Macron in the first round, she may support him in the second round, but only “to prevent Le Pen.” Her final decision would probably depend on how close the two are in the polls, she said.

Leftist voter Claude Watel, 62, said he had already made his choice: In the case of a Le Pen-Macron runoff, he will cast a blank vote.

The “republican front” — a coalition of voters to stop Le Pen in 2017 — proved “not much of a barrier” in hindsight, he said. “Five years on, the far right is even stronger.”