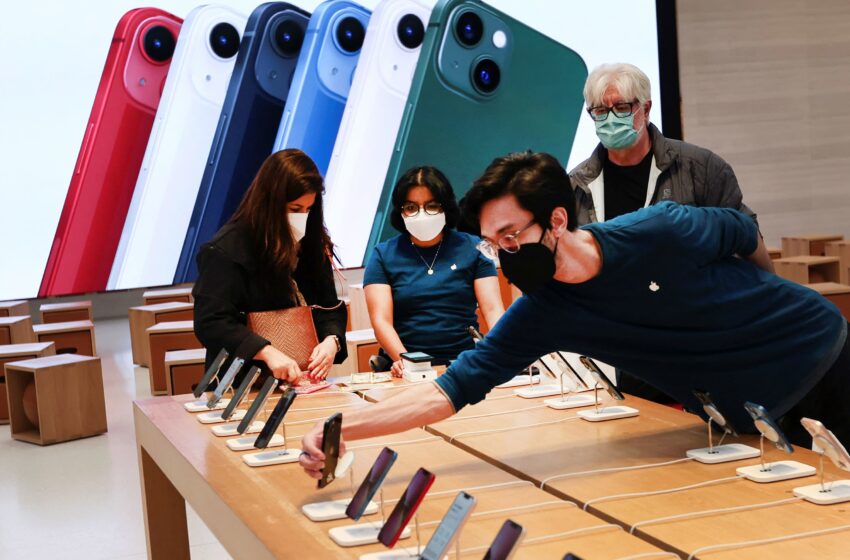 An employee arranges Apple iPhones as customer shop at the Apple Store on 5th Avenue shortly after new products went on sale in Manhattan, in New York City, March 18, 2022.

Apple iPhone assembler Pegatron said it has suspended production in Shanghai and the nearby city of Kunshan amid strict Covid-19 prevention measures, according to multiple reports.

Shanghai authorities have imposed stringent stay-at-home measures as mainland China faces its worst Covid outbreak since the initial phase of the pandemic in early 2020. Those government lockdowns, which began in late March, have threatened to disrupt global supply chains. And it shows the risks associated with Apple’s reliance on manufacturing in China.

Pegatron assembles about 20% to 30% of all iPhones, Nikkei Asia reported. The Taiwanese company had been able to continue production until now because the Chinese government allowed some manufacturers to keep operations going via a closed-loop system to reduce the chances of infections, Bloomberg reported.

“The Pegatron closures throws gasoline on the raging fire which is the supply chain for Apple and other parts of the iPhone ecosystem,” Wedbush analyst Dan Ives told CNBC in an email. “This is not the news the bulls want to hear as this amplifies supply chain issues for iPhones just as Apple was seeing an improvement.”

Shares of Apple were up more than 1% in the morning, suggesting investors aren’t concerned about reports of a suspension of production.

It’s the latest hit to Apple, which just announced its slate of new products, including a budget iPhone. Last month, Foxconn, a major assembler of iPhones, suspended full operations. It has since “basically” resumed normal operations, according to Reuters.

Foxconn at the time said it would adjust its production line to other locations to minimize the impact. Almost 50% of iPhones are produced at a factory in Henan province, according to a Bank of America research note. But Pegatron’s only active iPhone manufacturing facilities are in Shanghai and Kunshan, according to Nikkei. Its new iPhone assembly plant in India has not yet started operations, according to the report.